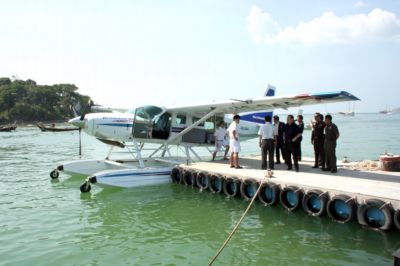 PHUKET: The Destination Air seaplane shuttle service, the license for which was revoked by the Department of Civil Aviation (DCA) last year, has confirmed that all of its services will remain suspended until the company is bought out.

When one is chosen and the transaction completed, the service will probably resume “intact”, he said.

The new owners should be able to obtain the DCA license because the “political climate” that led to the license revocation in the first place has changed, Mr James added.

Resort owners at the south end of Patong Bay, where the Destination Air seaplanes were landing, cited safety issues and noise pollution when petitioning then-Governor Niran Kalayanamit to order the service stopped.

The order came in early April 2008, at the end of the high season, when the carrier was scheduled to suspend the Patong service anyway due to monsoon season conditions and the drop in tourism.

The company then had its license revoked for failure to comply with DCA requirements, such as advertising scheduled flights on its website – something which is not permitted by a charter carrier.

Mr James said the company website, which still advertises scheduled flights to Patong and other destinations in the region, will soon be set aside until sale of the company is complete.

Asked about competition from the recently-launched Advance Aviation helicopter shuttle service, Mr James pointed out that seaplanes are a more economical option for tourists seeking a quick ride to resorts on outlying islands.

A seaplane can seat eight or nine passengers at a cost of US$2,000 per hour. That is about half the price of Advance Aviation’s Phuket-based Europcopter EC130, which seats six passengers and has costs starting at about US$2,000 for a half-hour flight.