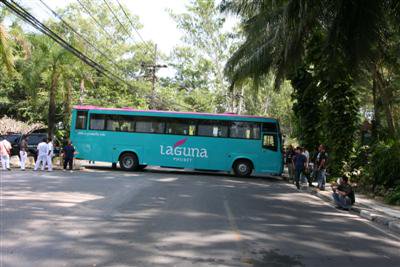 CHERNG TALAY, PHUKET: Disgruntled staff members at the up-market Laguna Phuket resort complex have abandoned their duties and blockaded the road entrances to the resort, causing disruption to operations and preventing access.

Protesters said they were angry they had received a bonus of two weeks’ pay for 2008, rather than the usual four weeks, and had been denied pay increases.

A written statement from the hotel union seen by the Gazette claimed that the various companies operating under the Laguna umbrella had all performed well in 2008 and that the company was secure, strong and among the leading tourism companies in Asia.

Natasha Eldred, Assistant Director of Marketing Communications at Laguna Phuket, said, “The hotels and business units at Laguna Phuket are experiencing disruptions to operations and the management are gravely concerned about the impact this action will have on Phuket’s already declining tourism business.”

According to a press release issued by Laguna Resorts & Hotels, the protest began yesterday afternoon with 150 to 200 employees, or about five percent of the total workforce, marching and assembling at the entrance to the resort complex.

Many of the protesters were still in uniform, while others were dressed casually.

One route into the resort was blockaded with a Laguna tour bus, preventing access by vehicles to parts of the complex.

Additional blockades were added overnight, “preventing arrivals and departures by guests, associates and residents,” according to a statement by Laguna Phuket.