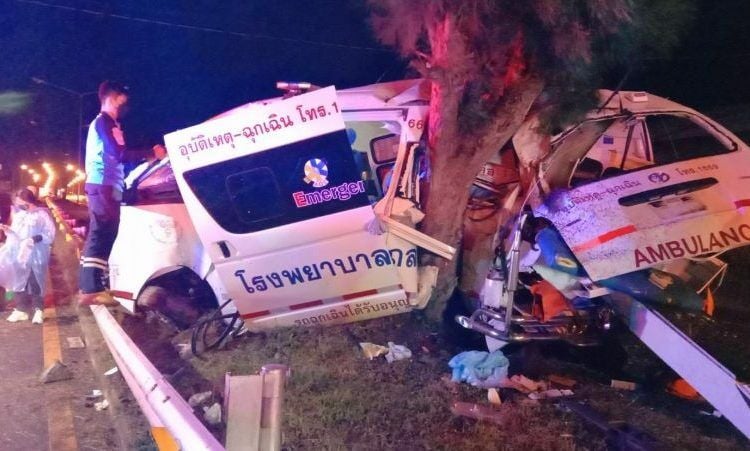 Early this morning, an ambulance crashed into a light pole and then a tree. The ambulance driver and two nurses sustained minor injuries. The vehicle was not carrying a patient at the time.

The Phuket city police were called and they arrived at the scene around 1:30 am.

Police and rescue workers (that weren’t in the ambulance) got to the scene and noticed the Thailand Hospital ambulance had sustained significant damage and was currently wrapped around a tree.

Thai media reports that the driver only sustained a minor injury to his forehead. The nurses, minor scratches on their bodies. The injured rescue workers were taken to Vachira Phuket Hospital for further medical attention.

The ambulance driver, whose name was not given to the media, has told police that they were going back to Thalang Hospital after they had dropped off a patient at Vachira Phuket Hospital, a hospital they would be seeing again shortly.

The ambulance driver says the road was slippery due to heavy rain. Strong winds also made the vehicle unwieldy. Thus, the contributing factors led to the driver losing control, pinballing off the light pole and then a tree.

Police are checking nearby CCTV footage to verify the driver’s statment.

Last year, an allegedly intoxicated man blocked an ambulance, which led to a patient dying. A man stole an ambulance and was quickly arrested. A woman strapped to a stretched shot out the back of an ambulance while it was driving. And an ambulance exploded.