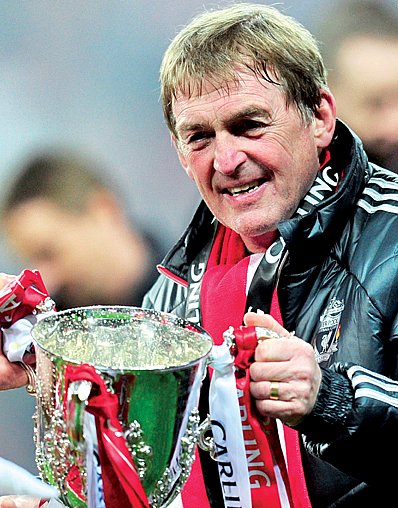 Kenny Dalglish, who became only the seventh manager to win all three major domestic titles, heaped praise on Cardiff City, with the Premiership side needing penalties to take the first trophy of the year.

Despite the manner of the win, (3-2 from a penalty shootout after Steven Gerrard’s cousin, Anthony missed for Cardiff), Dalglish believes it is start of a new era for the Reds.

Arsenal came from behind to humble North London rivals Tottenham 5-2 in their Premiership fixture at the Emirates, and eased the pressure that has been mounting on their manager, Arsene Wenger.

An early strike from Spurs’ Louis Saha and a calmly taken penalty by Emmanuel Adebayor beyond the reach of Szczesny with only 34 minutes gone and they could have been forgiven if they thought the result was in the bag.

Wenger admitted himself at 0-2 down, he feared his team would lose composure due to a lack of morale and spirit, however the Gunners responded by firing in five of their own in a dazzling 27 minutes of action.

Barcary Sagna left unmarked headed home from close range, and Robin van Persie, who had already hit the post, leveled the scores with a stunning finish.

Tomas Rosicky put Arsenal ahead in the 50th minute and Theo Walcott bagged a brace to complete the reversal in fortunes, and quietened his own detractors.

Arsenal also reported profits of £49.5mn this week and now have cash reserves of £115.2mn.The question is will they part with any for new players, or even, daring to suggest, a new manager to be serious challengers for the title next season?

Andre Villas-Boas’ week did not improve his situation, even with a 3-0 victory over lowly Bolton.

The Blues were completely outplayed in the Champions League by Napoli on Tuesday, losing 3-1 to underline the gulf in quality. In simliar circumstances last year, Carlo Ancelotti was sacked.

Despite predictions of a walkover by Wales when they met England last weekend in the RBS Six Nations, the game and result were anything but.

Wales started the brighter of the two, and could have gone over within two minutes of the kick off. However, David Strettle’s saving tap tackle was just enough to fell George North who had been given space from quick ball from a Welsh line-out.

England’s defense weathered the early onslaught, and even had some good fortune as Leigh Halfpenny sliced a straight forward penalty kick.

England fought back and put the first points on the board through Owen Farrell, one of seven English players in their maiden outing at Twickenham.

The game was played at a blistering pace with bruising tackles, try saving blocks and accurate kicking to the half time whistle with England holding a slight advantage, 9-6.

The action continued in the same vein on the resumption until Wales’ Rhys Priestland attempted clearance was charged down, and was subsequently yellow carded for a deliberate off-side when England looked certain to gain the first try of the encounter after recycling the ball quickly. Farrell fired the penalty over to extend the English lead.

Unlike Welsh teams of the past, they dealt with the one-man disadvantage professionally stifling their opponent’s attacks and even closed the gap when Halfpenny kicked another three points. Priestland returned to the fray, his team unpenalized.

Halfpenny brought Wales level with his fourth penalty score, and with four minutes left on the clock Scott Williams ripped the ball from England’s Courtney Lawes, punted forward and gathered a fortunate bounce to touch down between the posts. Halfpenny converted easily to take the lead 19-12.

England charged down the field from the restart and after two line-outs on the Welsh try line, Strettle went over in the corner. The referee referred to the fourth official. Inconclusive came the response, and with the ball declared ‘dead’ despite a penalty outstanding, the referee blew time and Wales had their 20th Triple Crown.

In the other matches Ireland ran out comfortable winners 42-10 over Italy, while Scotland’s brave efforts came to naught losing 17-23 to France at Murrayfield.

This weekend Ireland face France in Paris in their rescheduled fixture.

CRICKET:Kevin Pietersen guided England to a five run victory in the third and final game of the Twenty20 series with Pakistan, scoring an unbeaten 62 off 52 deliveries.

Captain Stuart Broad’s accuracy with the ball supported Pietersen’s controlled innings, who conceded only four runs from a miss-field in his final over, and also took Umar Akma’s wicket, caught at mid-off.

The win secured the series 2-1 and gave England a psychological boost for their defense of the World Twenty20 title to be held in Sri Lanka, during September this year.

F1: The new season will be under starter’s orders in two weeks with Red Bull favorite to retain both driver and constructor titles, if recent testing is any guide.

Sebastian Vettel and Mark Webber have both posted consistently impressive times throughout testing.

Ominously for McLaren, if under full race conditions the times would equate to Lewis Hamilton and Jenson Button both being lapped.

Ferrari, Mercedes and Force India are very much in the mix, though also lagging behind Red Bull by three tenths of a second per lap.

German authorities are investigating the events and charges could be brought against both boxers carrying sentences of up to 10 years.

Chisora is to appear before the BBBC by March 14 due to his actions, and has already been suspended indefinitely by the WBC.

Hayes confirmed he is retired and will not return to the ring.

Phuket sports: The boys from Brazil