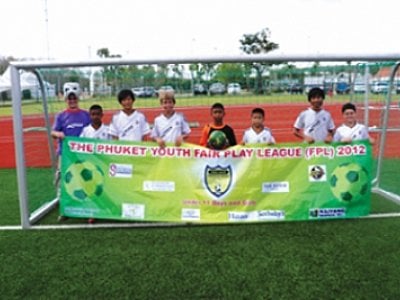 Four of the six teams competing in the U14 Division have a real chance of taking the title which makes winning remaining matches crucial to any hopes of success.

Third placed Argentina played second placed France, with both teams needing points to keep the pressure on Germany Green. In a match full of great attacking play, France claimed three points in the final two minutes with a 6-5 win.

In the second match Germany White, still looking for their first points of the season played a well organized and tough Thailand team. It was the Thailand team who started the stronger, taking an early lead before Germany White grabbed an equalizer just before the half-time break. Thailand regained the lead in the second half and should have held that advantage, but a rash challenge by the Thailand goalkeeper was punished with a penalty and duly converted by his opposite number, the Germany White goalkeeper, that gave his side a 2-2 draw and their first points of the season.

The final match at Youth Football Home saw leaders Germany Green play Brazil, the division’s in-form team. In a tight first half, both teams kept possession well by using the full width of the pitch, but Brazil struck first followed by Germany Green equalizer. Brazil went ahead again just before the break and after the restart, continued to apply pressure. Germany Green struggled to deal with the Samba King’s long balls and suffered a 9-4 defeat.

For the first time, U11 matches took place on the new artificial pitch at QSI. The opening game saw Germany White play attractive, attacking football to claim a 7-1 victory over France and their third win of the season.

League leaders Brazil faced an improving Argentina in what turned out to be an enthralling encounter in the day’s penultimate game. Brazil took the lead early in the first half but were unable to build on it. Argentina scored a deserved equalizer with only three minutes remaining affording both teams a justly deserved draw. The final match was an opportunity for Germany Green to close the gap on Brazil should they beat Thailand. In a one-sided affair, Germany Green defended well and scored well worked goals to win the match 5-0 and reduce Brazil’s advantage to that of just one point.

World sports: What’s in a week?