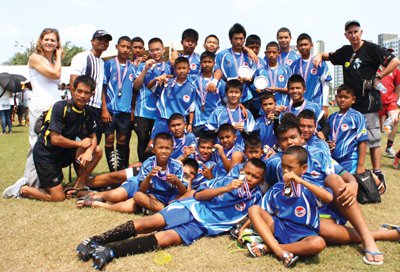 PHUKET: The Phuket Lomas recently participated in the two-day Bangkok Youth Rugby 10s tournament at Pattana International School with great performances from both the U12 and U16 teams in their respective divisions.

On the first day of competition the Lomas U16s faced cup favourites CIMB Cobra from Malaysia. It was a tense battle in which the Lomas matched their opposition in nearly all parts of the game, but failed to convert scoring opportunities into points. A single try and conversion was the eventual difference between the teams with CIMB defeating the Lomas on a 7-0 scoreline.

Another tough match awaited the Lomas in their second outing, this time against British International School from Shanghai. The Lomas dominated possession and territory, but again their efforts failed to translate on the scoreboard. A breakaway try from the Chinese side forced the Lomas to abandon caution which unfortunately led to intercept score and another defeat by 12-0.

The U16s final match against Nak Suu Tigers from Bangkok was a different affair.This time game plans and skills all gelled for a convincing 19-0 victory. Three games and one victory only reflected the standard of competition the Lomas were up against, but their performance and efforts were well received.

In the U12 Division, the Lomas took on the Bangkok Japanese in game one and completely overwhelmed their opposition with a display of controlled rugby that afforded them a 25-0 victory. Confidence was running high as the Lomas went up against AGOAL Rugby Academy from Sri Lanka and it showed with the Phuket boys recording a 20-0 victory.

Two wins from two, but the Lomas toughest challenge was yet to come, and that in the form of Bangkok Lions. The Lomas took an early lead with two unconverted tries that drove the Lions into a response. At 10-5 the game hung in the balance, but the Lomas held on for a deserved win.

Saturday’s final game saw the Lomas up against 2011 champions, Sandy Bay from Hong Kong. The Lomas again struck early with two tries using their bigger forward line to great effect. Not until the last two minutes of the match did Sandy Bay breach the solid Lomas defense to inspire hope of a result, but the Phuket lads were not going to let this victory slip and sealed an historic10-5 victory with a determined performance.

Sunday’s schedule kicked off with the Lomas U16s first into the fray against old friends and adversaries the Bangkok Lions. The match developed into a classic encounter between the two rival Thai teams with enterprising play from the Lomas sparking two converted tries and a half time 14-0 lead. But the Lions roared into life for the second half and a converted try put the Bangkok team within reach of a win. A penalty was later squandered, but the Lions recovered and in the dying minutes of the game went over in the corner. However, the subsequent conversion was missed and the Lomas had secured their second win of the tournament 14-12.

Last of the Lomas U16 pool games was against AGOAL. Past games against these two physical sides have been feisty affairs and this was no exception with furious tackling and rucking giving the referee a torrid time, but no scores to record in an entertaining 0-0 draw. The result meant that both teams had to contest the Plate final and again the tension was palpable. Neither side would yield until the Lomas broke through to score for a 5-0 half time lead. A altercation between the Sri Lankan team’s representatives and the event’s organizers and officials delayed the restart. From there the Lomas seemed to be penalized at every opportunity, eventually leading to AGOAL scoring a try in the corner with the last play which was brilliantly converted for a 7-5 victory. A devastated Lomas U16 team received a deserved Plate runners up medal for their hard work over the tournament.

Tremendous traveling support for Sandy Bay ensured a boisterous final, but the Lomas dampened their fervor with an early try. The Phuket stars held that 5-0 advantage until after the break when Sandy Bay applied wilting pressure to draw level. The Hong Kong lads had the momentum and in the last minute scored in the corner to win 10-5.

A cracking all-round display from the U12s was rewarded with a deserved runners up placing in the cup.

The Bangkok 10s Senior tournament was won by the New Zealand Legends who defeated COBRA from Malaysia in the final.

World sports: What’s in a week?