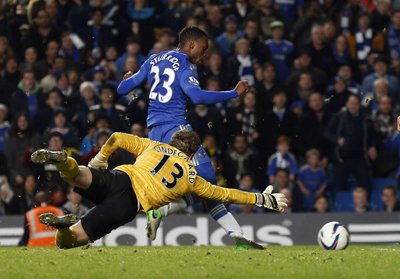 Holders Liverpool, fielding a weakened side for the secondary cup competition, were knocked out by boss Brendan Rodgers’ former side Swansea City 3-1 while Norwich City came from behind to beat Tottenham Hotspur 2-1.

Chelsea’s reward for prevailing in yet another high-scoring game is a trip to old foes Leeds United of the second tier in December while fourth division Bradford City will host Arsenal, 7-5 winners over Reading on Tuesday.

Swansea have the luxury of a home clash against second tier Middlesbrough in the last eight following yesterday’s draw and Norwich will host Aston Villa and their former boss Paul Lambert.

Sunday’s league meeting between Chelsea and United was characterized by two home players being sent off, an offside winner and referee Mark Clattenburg being accused of using inappropriate language to Chelsea’s Nigerian John Obi Mikel.

The cup game at Stamford Bridge was just as action-packed and followed the recent theme in England of goals galore flying in, although Alex Ferguson and Roberto Di Matteo sent out vastly different teams from Sunday in the often maligned tournament.

Javier Hernandez grabbed the lead back for United after another defensive mistake before defender Gary Cahill again leveled matters on 52 minutes.

United again went in front just before the hour mark thanks to Nani’s cool chip, but another penalty, this time from substitute Eden Hazard, sent the match into extra time.

Daniel Sturridge, who had missed a host of chances throughout, nabbed Chelsea’s fourth by latching onto a poor back pass and there was even time for a Ramires goal and a Giggs penalty.

“All we needed to do was see the game out and keep possession. I think the young players started to feel it,” Ferguson told Sky Sports.

“We had control of the game. If you are leading 3-2 in the final seconds of the game you really should see it out.”

Di Matteo was overjoyed after a difficult few days for the European champions.

“We showed on Sunday that we’ve got big characters in the dressing room and we had to show it again tonight. They showed a big big passion and pride to show they didn’t want to lose this game,” the Italian told a news conference.

“It was a very exciting game of football to watch, a typical cup game, quite open at times, a lot of mistakes from both teams because there were a lot of young players involved.”

Penalty saved
Liverpool boss Rodgers, who left Swansea in the close season, saw the Welsh side prevail at Anfield to humiliate his stuttering side.

Chico grabbed the opener for Swansea in the 34th minute as Liverpool also played a much-changed side with forgotten man Joe Cole getting a rare look-in but failing to impress.

The weakened hosts went 2-0 down midway through the second half through Nathan Dyer before substitute Luis Suarez pulled one back and Jonathan de Guzman sealed Swansea’s first ever League Cup quarter-final spot late on.

Norwich will also be in the last eight after coming from behind to beat a dominant Tottenham at home with Simeon Jackson grabbing the 87th minute winner.

In-form Gareth Bale had put Spurs ahead on 66 minutes but Jan Vertonghen’s own goal six minutes from time leveled the scores while there was time for Clint Dempsey to have a penalty saved for the visitors after Jackson’s strike.

Honors even between Bangkok and Phuket