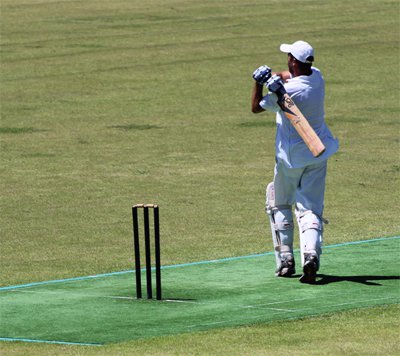 Two games were played with the PCG team winning the 30-over game on Saturday, whilst the BCB team won the T20 match on Sunday.

A unique match format was invented for the 30- over game played on Saturday. The match consisted of two 15 over innings for each team.

The PCG won the toss and elected to field. In an innings dominated by the PCG pace attack, in particular Val Guiraud (2 for 12), the BCB team were only able to post 78 for the loss of five wickets in the allotted 15 overs. Their top scorer being N White (39).

Phuket came out with bats blazing, amassing a healthy 91 for 3. J Anderson anchored the innings with a contribution of 39 not out. With their backs firmly against the wall, the BCB made a concerted effort to swing the game in their favor during their second stint at the crease. An overall team contribution saw them reach 94 for 6, setting PCG a target of 81 runs for victory.

The PCG chased down the target with relative ease scoring the winning runs with three overs to spare.

The second game of the weekend took on the exciting T20 format. The BCB were looking to exact their revenge after Saturday’s loss.

The PCG were sent in to bat first. With the assistance of some tight bowling and dedicated fielding by the visitors, the home side were limited to scoring 131 for the loss of six wickets. A determined batting performance by BCB sealed their victory by the 18th over.

Phuket is fast becoming the cricket tour destination of choice in Thailand, with several touring teams being confirmed to take on the PCG in the future.

The Jones Lang LaSalle Hotels cricket league will start its season with a family day this Sunday at the Alan Cooke Ground.

“… most successful doping program that sport has ever seen.”