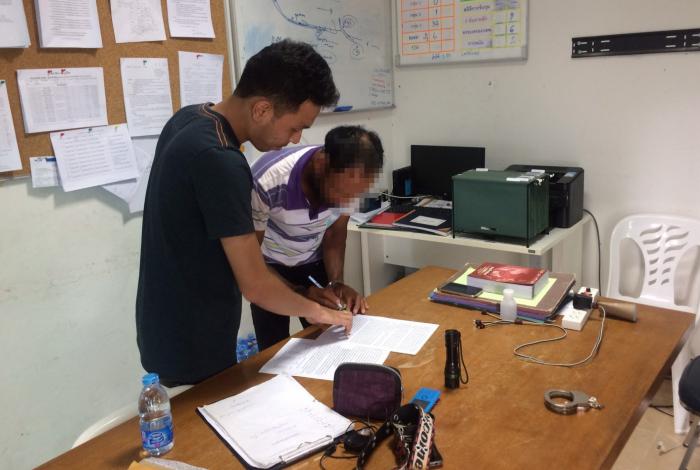 PHUKET: A Myanmar worker suspected of killing a colleague was apprehended within an hour by police Sunday night at a workers camp in Kamala.

Lt Col Somnuek Damkaew of Kamala Police arrived at the scene after he received reports of the incident at about 11:50pm.

The head of the workers, named as ‘Kyaw Sein Win @ Bun’, had reportedly had several previous arguments with Ta Zai U Kyi, 35, as he was paid too little and was going to resign. When the police arrived, they saw a Myanmar man standing over Mr U Kyi’s body, which lay in a pool of blood.

“Witnesses told us that at about 8:20 pm, they saw Mr Bun, 47, and another Myanmar national named only as ‘Uan’, arrive at Mr U Kyi’s accommodation, where Mr Bun ordered Mr Uan to kill Mr U Kyi ,” said Col Somnuek. “Mr Uan took a meter-long crowbar and smashed Mr U Kyi on the head three times and ran away. Another witness told us that he heard the commotion and ran out to see Mr Bun and Mr Uan jumping on a motorcycle and running away. He called for help but it was too late.”

Police spotted Mr Bun at the scene of the crime while they were questioning witnesses.

“We arrested him, but he claimed that he only tried to stop Mr Uan from hitting Mr U Kyi. He also told us that he was scared, so he rode off with Mr Uan to throw away the murder weapon in a pond nearby. Mr Bun took us to Mr Uan’s camp later, but he’d already left,” confirmed Col Somnuek.

“We took Mr U Kyi’s body to Patong Hospital.”

Police have yet to find Mr Uan and the murder weapon, while Mr Bun was charged with gang murder.