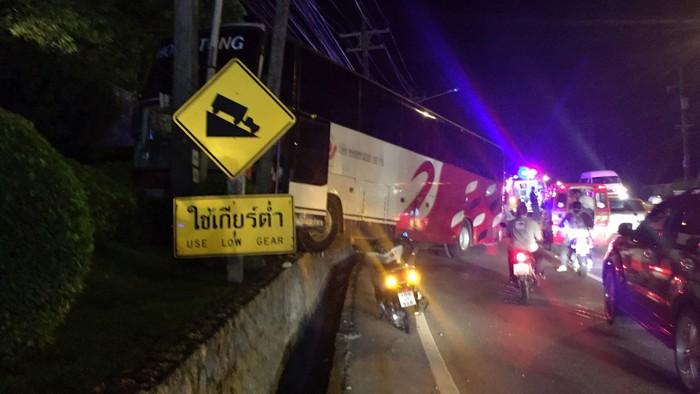 PHUKET: The driver of a coach carrying Chinese tourists says he ‘lost control’ of the vehicle when its ‘brakes failed’ on Patong Hill last night, resulting in serious injuries to the riders of a motorbike.

The coach was heading down the hill into Patong at 10:23pm when driver Uayporn Rattanasaeng, 51, hit the bike and then slammed into a roadside power pole on a raised embankment outside the Wyndham Sea Pearl Resort.

Motorcycle rider Nattachai Janmala, 33, and pillion passenger Ratchanok Masjula, 22, were badly injured in the collision. All 19 of the coach passengers and the driver escaped unscathed.

The coach driver told police his brakes had failed as he took the steep bend, causing him to hit the motorcycle before riding up the embankment, Patong Police Captain Wutthiwat Liangboonjida told the Phuket Gazette this morning.

Mr Nattachai and Ms Ratchanok are under doctors’ supervision at Patong Hospital.

Police have charged Mr Uayporn with reckless driving causing injury, while they investigate to determine the true cause of the crash.