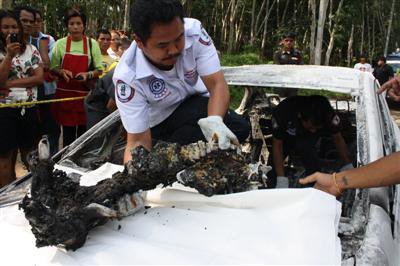 CHALONG, PHUKET: Chalong Police say a 50-year-old Thai woman has confessed to having her elderly Japanese husband murdered after he asked if he could keep a mistress.

Seventy-five-year-old Yukiho Yamada’s skeletal remains were found in a burning car in Chalong at around 4:30am Wednesday morning.

The couple had been married just over a year.

As of this morning Mr Suwit remains at-large.

Wichit Mapan, a gardener at Kalim-Patong Residence, witnessed the fire that claimed the Japanese man’s life.

Mr Wichit lives at a workers’ camp near where the burning car was discovered.

He told police he was sleeping in the camp on Soi Klumyang in Chalong Village 7 when he was awoken by the sound of a passing car.

He was surprised by this because the road is a dead end.

He heard a voice from the car shout in Thai, “We can’t go any further, it’s a dead end”.

The car reversed back down the road and appeared to become stuck in mud, Mr Wichit said.

Mr Wichit was going to go out and help push the car out of the mud, but opted to go to the toilet beforehand, he told police.

When he finished and went outside, he saw the car engulfed in flames.

He called the police, who quickly arrived at the scene together with firefighters.

It took about half an hour to put the fire out. Police found a charred skeleton on the front passenger seat.

Due to the heavy damage done to the car, the license plate was unreadable.

Police were able to identify the owner of the vehicle as Mrs Tubtim by the serial number engraved on the engine block.

Upon searching her home in Anupat Manorom Village in Wichit, police investigators found bloodstains on the living room wall and above the refrigerator in the kitchen.

Police will conduct a DNA analysis of the blood against a sample from one of Mr Yamada’s relatives, who has already flown in to Phuket from Japan.

Police have yet to confirm with 100% certainty that the charred skeleton in the car is that of Mr Yamada, but they expect tests to confirm this soon.

Mrs Tubtim told police she married Mr Yamada at the Thainaan Restaurant at the Darasamuth School intersection in Wichit on August 8 last year.

After four or five months of marriage, they started fighting constantly, said Mrs Tubtim, who kept her face hidden at all times during the press conference yesterday.

A few months ago Mr Yamada asked if he could begin a relationship with another woman, she said.

Mrs Tubtim is understood to have initially told police Mr Yamada drove their Honda Civic car away from the house in the morning and did not return.

She later confessed to hiring Mr Suwit to kill her husband, although she denies taking part in the murder herself, police said.