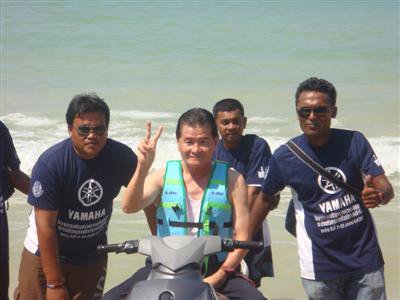 PATONG, PHUKET: More than 200 people with a complement of 70 machines turned out for today’s ‘jet-ski jamboree’ on Patong Beach.

The event, organized by the Phuket Jet-ski Rental Club, was held to mark the official launch of the compulsory insurance scheme that the government hopes will put an end to the infamous ‘jet-ski scam’ in which tourists are overcharged for ‘damages’ to machines.

As part of today’s activities, Phuket Governor Wichai Phraisa-ngop took to the sea for his first-ever jet-ski ride, accompanied by an escort from the rental club.

No escort was really required, however, as Phuket’s top bureaucrat quickly mastered the technique, returning to the beach about 20 minutes later with a big smile on his face.

Gov Wichai is the mastermind behind the compulsory insurance scheme, administered by Ayudhaya Insurance.

After tooling around the bay, Gov Wichai presided over a ceremony to distribute the new polices.

Among those accepting the policies was jet-ski operator Winai ‘JJ’ Naiman, the jet-ski operator who is currently out on bail after being charged with extortion for allegedly threatening British marines at gunpoint in an altercation that made international headlines and garnered over one million hits on YouTube.com.

In his speech, Gov Wichai gave his personal promise that problems with the jet-ski rental industry are now a thing of the past, thanks to the insurance plan.

To underscore the point, Gov Wichai also led the jet-ski operators in an oath pledging to be fair or honest in conducting business. He also lectured them of the karmic consequences of bad behavior.

Mr Rowan said he was happy his firm could play a part in helping out the Thai tourism industry.

“Last year around 13 million tourists came to Thailand, five million of them visiting Phuket…So we are really happy to be part of tourism in Phuket and ensuring tourist continue to visit,” he said.