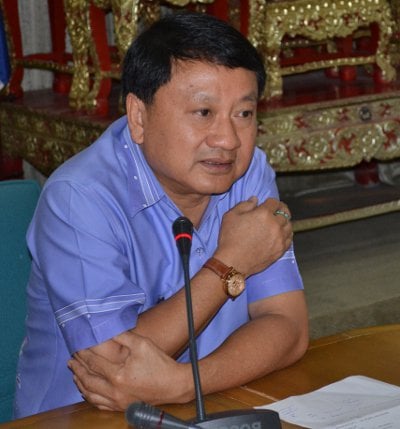 PHUKET: Phuket Governor Tri Augkaradacha yesterday ordered all police officers across Phuket to keep an eye on specific communities where vote buying is reportedly taking place, ahead of the July 3 general election.

The governor yesterday chaired a meeting of Phuket Election Commission (PEC) and representatives from every police station on the island.

“The PEC has received many complaints about vote buying,” Governor Tri told the law enforcement officers.

Complaints had been received by several communities in Phuket Town, Rassada, Koh Kaew and Mai Khao, he said.

“I have assigned police officers, at the meeting today, to keep an eye out for and to investigate any instances [of vote buying].

“Phuket Provincial Police Deputy Commander Peerayut Karajedee said police will independently confirm whether or not any tip-offs about vote buying were true. If the reports are substantiated, then police will carry out their duty,” he said.

“Some [election campaigners] will note down the name from the ID cards [of vote sellers], while some will take possession of the cards.

“Money, typically 500 baht to 1,000 baht, will be paid to each card holder as a deposit. On election day, the ID cards are returned. If the vote results turn out as they expect, the canvassers pay the rest of the money according to their previous agreement,” Gov Tri explained.

On July 3, as with any other general election, ballots will be counted at polling stations, he said.

“So the candidates can [easily] check whether the money they paid [to buy votes] and the vote results are balanced or not. This is unlike local elections in which ballot counting takes place at an outside location specified by the Election Commission,” he explained.

This form of vote buying is hardly new and has been endemic in the North and Isarn for years, Governor Tri said.

“It is just gaining popularity in Phuket. Past elections here went well. Vote buying was not as widespread as it reportedly is this time around, according to the media,” he added.

All canvassing efforts should conform strictly to electoral law, he said.

Foul play not only corrupts the political process, but also wastes taxpayer’s time and money, he added.

“If there is a foul play, it will waste the Election Commission’s time by forcing them to conduct investigations. Then if red or yellow cards are issued, new elections must be conducted at the taxpayers’ expense,” said Gov Tri.

“No matter who wins or loses, they should accept the result as the voice of the electorate,” he concluded.