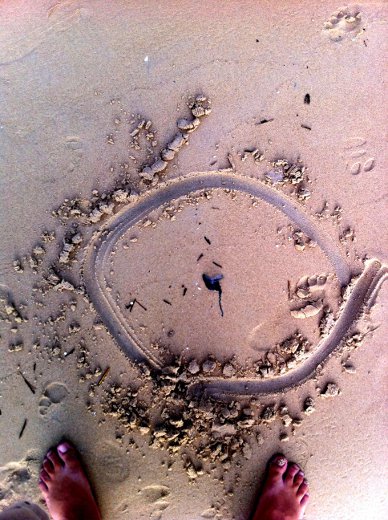 PHUKET: The Phuket coastline is still not yet clear of Portuguese man o’ war “jellyfish”, with the latest sighting by a sharp-eyed beachcomber at Patong Beach at dusk yesterday.

Professional photographer Dan Hartwright was walking along the beach with his young son on his back when he noted the characteristic air bladder of one of the creatures washed up on the sand.

His photography equipment unavailable, he snapped the picture with his iPhone4.

“I would hardly agree the coast is clear!” he wrote.

“I told the ‘lifeguards’ on Patong Bay last night that for two nights in a row I have found washed up bluebottle jellies on the beach. They just shrugged and said it was the wind,” he added.

Also known as a”bluebottles” in Australia and maeng kaphroon fai (literally “fire jellyfish”) in Thai, the venomous creatures have an air bladder that acts as a kind of natural sail, but have no way of controlling their own movement.

The current sightings have been credited to strong onshore winds and monsoon season currents.

By Tuesday, the reports had dissipated and experts announced that the scare was likely over.

Thus far there have been no stings reported, but the Phuket Lifeguard Club is advising all swimmers and beachcombers to be alert. The creatures can deliver a nasty sting even after washing up on the beach.

Have you spotted a bluebottle jellyfish on a Phuket Beach recently? Send your photo to editor@phuketgazette.net and share it with fellow readers.

MCC to play in Phuket

Vote buying on the rise in Phuket: Governor