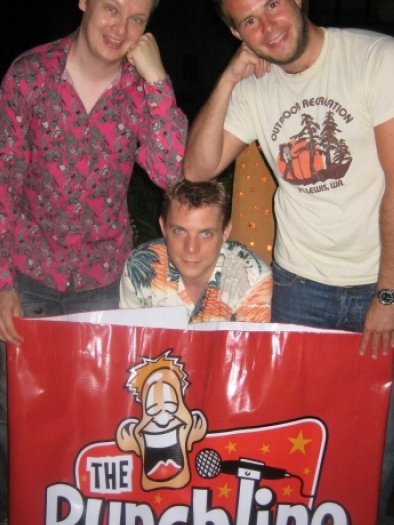 If the Phuket Punchline Comedy Club had an announcer roaming the streets of Patong then that’s what they might say.

No such luck, so we’ll do it for them.

Tonight is the next installment of the Comedy Club at the Holiday Inn Resort in Patong. And yes, there are still tickets available on the door.

This is one night of comedy not to be missed.

Award-winning English gagmeister Stephen Grant will return to warm up the audience with his own brand of clever humor before two of England’s finest young comedians take to the stage.

Grant performed at the Comedy Club’s opening show back in 2007.

He is one of the United Kingdom’s funniest, hardest-working and most respected comedians on the circuit, an award-winning MC (Chortle Best Compere Award 2008 & 2011) and is the resident compere at the Krater Comedy Club in Brighton.

He performs at clubs and corporate events all over the UK and on the international circuit and has taken six critically acclaimed stand-up shows to the Edinburgh Fringe since 2003. His fourth DVD is due to be released this year.

Englishman Jimmy McGhie went from “one to watch” to “see him now while you can get a ticket”. A highly regarded young stand-up comic, McGhie performs on the UK and international comedy circuit to great acclaim.

Fellow Englishman Michael Fabbri quickly stamped his mark on the UK circuit by appearing in the 2003 final of Channel 4’s So You Think You’re Funny? He rapidly earned a reputation as one of the most promising up-and-coming comedians on the circuit – a reputation that he is living up to, regularly performing for the best clubs in the country.

With a dark and honest approach to some of life’s more touchy subjects, Fabbri manages to effortlessly slip between some harsh, controversial topics to lighthearted silliness to make for a refreshingly eclectic and brilliantly funny act.

The Phuket Gazette sponsors this event. Doors open at 8pm. The show starts at 8:30pm.

Tickets are priced at 1,200 baht at the door. A reasonably-priced bar and friendly servers will also be in attendance.

Vote buying on the rise in Phuket: Governor