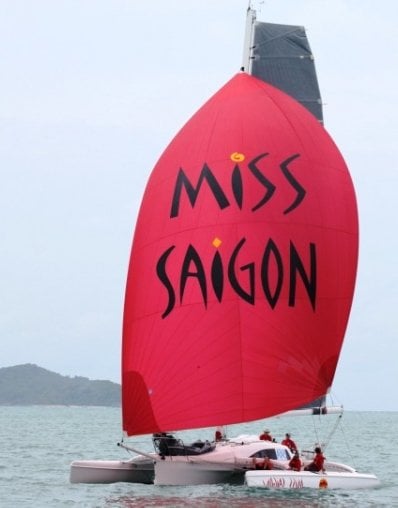 Performance Multihull Class (PMC) was an extremely tight contest over the three days. On the first day Paul Larsen skippering the Andaman Cabriolet DaVinci got off to a great start, but Alan Carwardine’s Sidewinder reduced the gap and led around the top mark.

As the winds died, Sidewinder’s lead disappeared, but Miss Saigon managed to pick up a breath of air which took her over the line in first ahead of Da Vinci in second position.

Seven Firefly’s began their challenge shortly after the PMC’s got underway. Andy Pape in The Frog triumphed in race one with John Newnham’s Twin Sharks close behind in second, and Roger Kingdon’s Moto Inzi taking third.

Consistent 8-10 knot rainless conditions on day two allowed PRO Simon James to run three races and get the Regatta back on track after the previous day’s weather problems.

Sidewinder took line honors in all three races, but could only convert the final race into a handicap win. Miss Saigon won two races and placed second place in race three, which when added to their first day victory, placed them first according to the PMC points system. A second and two third places for Da Vinci earned them second overall. A second, third and first place from Sidewinder saw a good progression up the table, but that disastrous fifth place on the first day kept them in third overall.

Firefly 850 One Design Class day two saw Voodoo claim two wins, a third place, and hopes for an overall victory. Moto Inzi’s first two races achieved only second and fourth places, but a victory in the third race drew them level with Voodoo on points. The Frog placed fifth in the first race, but followed with two second places to earn a share of first with Moto Inzi and Voodoo in a three-way-tie on 10 points going in to the final day’s racing.

With all to race for on day three, PRO Simon James chose Island Course nine to decide proceedings. Da Vinci took a tack out to oblivion, but managed to recover on the approach to Bon Island while Sidewinder led the fleet around the course. Miss Saigon could not be shrugged off and eventually picked up the handicap win to have their name engraved on the very first Corsair cup. Da Vinci placed second just three seconds ahead of Sidewinder in third place.

The Firefly’s were given two chances to settle the final outcome on day three. In the first race, Voodoo surged across the line ahead of Andrew Marshall’s Pink Lady and The Frog, with only one minute separating the first five boats.

The second race saw Voodoo seal a resounding victory and become the undisputed champion while a second place for The Frog was enough to earn them second in the final standings. Moto Inzi battled into third place and was awarded third on the podium.