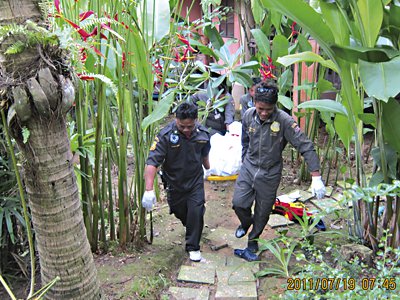 PHUKET: A 62-year-old Danish man was found dead in a resort garden near his Phuket hotel room this morning.

Lt Col Anek Mongkol, duty officer at Kamala Police Station, told the Phuket Gazette that staff at the Print Kamala Resort discovered the man’s body at about 6:30am and called the police immediately.

“His body was found in gardens beside a walkway that joins bungalows. His right arm had wounds we believe were sustained in a fall,” he said.

However, Lt Col Anek did not speculate what may have caused contusions to the man’s face.

“We have sent his body to Patong Hospital for further examination. We are still waiting for the results,” he said.

Hotel staff told the police that the man booked a hotel room for four nights, although police say his passport shows that he entered Thailand on June 27.

“He was last seen by a hotel security guard at about 1am. He was drinking in front of his room, but the guard paid no attention because he had seen the man spending much of his time drinking,” one police officer told the Gazette.

“We have yet to notify the Danish embassy of the man’s death. We are waiting for the report from the doctor’s examination first,” he added.

The man’s identity is being withheld pending notification of kin.