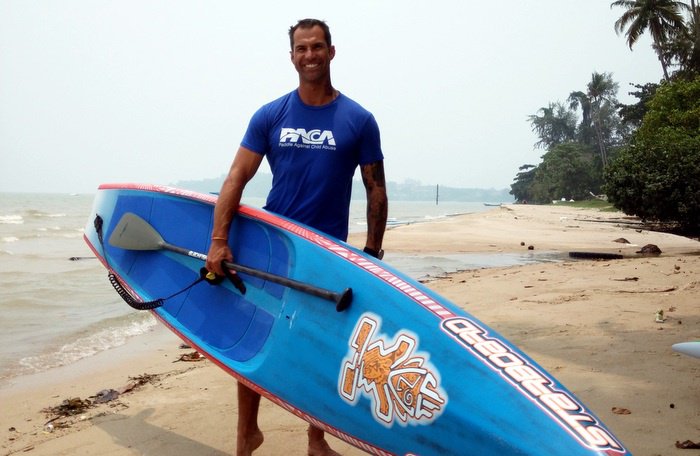 PHUKET: As part of his battle against child abuse, Damien Rider successfully circumnavigated Phuket on his standup paddle board (SUP), despite the dense Indonesian haze leaving him lost at sea earlier this month.

Mr Rider, a victim of child abuse, first caught the media’s attention with Paddle Against Child Abuse (PACA) when he completed an 800 kilometer prone paddle through the shark infested waters of the Gold Coast to Bondi Beach.

Though not as dramatic as being knocked from his board by a great white shark, Mr Rider faced a number of different challenges as he paddled around Phuket.

“Definitely the most challenging part was absolutely not knowing where to go. When that haze came in, I didn’t know what I was aiming for,” Mr Rider said.

“The haze was definitely a massive factor. I got lost at sea twice for about an hour. I couldn’t see land at all, not at all.

“It was kind of eerie when I was out there, because I’d start hearing these things and the water was making these noises and I was just waiting for some monster to come out of the mist.”

Mr Rider navigated during the trip by going from headland to headland. A single navigational error would more than double the distance he was forced to paddle as he went around islands on Phuket’s calm east coast and was occasionally lured into bays that he then had to paddle back out of.

The community that Mr Rider has found at Phuket Cleanse and in the southern end of Phuket, as well as his own mental space following a new-found pride in himself, set the stage for a very different game during the paddle.

“It was completely different than my last paddle. Last paddle, there were a lot of hidden demons in my head and emotional baggage that I had to get through,” Mr Rider said. “It was good for me to see that all that was gone and my PTSD [post-traumatic stress disorder] was gone. There wasn’t one time that I had a negative thought about my past or anything out there.”

Mr Rider’s childhood was filled with abuse from the age of six onward. He regularly attempted to flee it: sleeping in rock caves and under jetties – anywhere that he could escape to.

However, during this paddle, his time was eaten up with thoughts on navigation, looking at the stunning landscape as it appeared from behind the haze, listening to the sound of the water on his board and planning on how to ration his water and food.

Over the four days it took Mr Rider to circumnavigate the island, he spent a total of about 26 hours on the board.

“It was a lot easier than I thought it would be. All the training leading up to the event definitely made a difference. And all that’s down to Phuket Cleanse making it easy for me,” Mr Rider said.

“I only came here for a month to do the training. Do this event, go back to Australia to do another event. But I’ve found that that it’s a really good base for training for me, or anyone really, especially around Rawai.

“There are a lot of people here for the same reason: to get healthy and train – it’s that fit, healthy lifestyle.

“Everyone has been so hospitable to me, which is good as well, because as an athlete doing an individual sport, it can get quite lonely if you are doing everything by yourself. Here, I’ve been able to surround myself with like-minded people.”

Since his arrival on Phuket, Mr Rider has become a role model to many youngsters and adults on the island. During his stay, he has visited a number of schools to talk about his personal experiences with child abuse.

“I’m just a regular guy having a go at trying to change a situation that I have experienced. People don’t have to paddle all kinds of stupid distances to make a difference,” Mr Rider said. “Dedicate something you are passionate about each day to the victims of child abuse. You don’t have to announce it. Just start within yourself.”