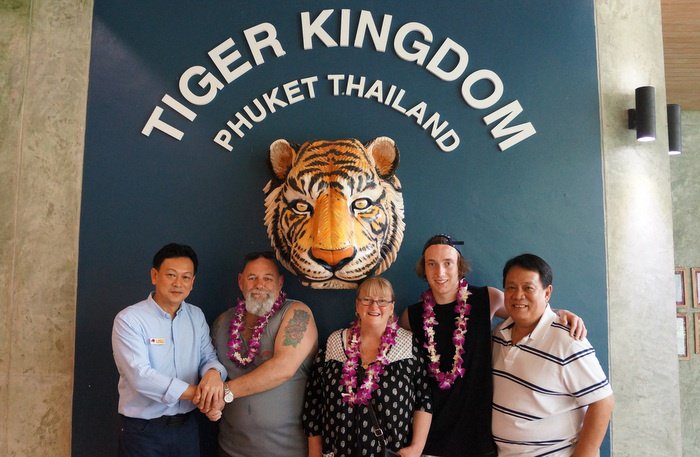 PHUKET: The Australian tourist who was mauled by a Phuket tiger last year returned to Tiger Kingdom yesterday to visit the big cats.

“This is my first time on the island since the last visit twelve months ago. My leg is good… it healed well,” said Paul Goudie, who immediately set off for Tiger Kingdom with his wife Jennifer and son Jake, once they arrived in Phuket.

“The doctor took the muscle from the other leg and put it over here [the injured leg]. It took four months to heal; I went back to work in February. However, it is all about [having] a good attitude. I’m not angry at anyone.”

In October last year, Mr Goudie had just had his photograph taken inside a cage with a tiger and was struggling to stand up when one of the Tiger Kingdom employees watching the animal went to steady him and prevent him from falling on the big cat.

“We believe the tiger was trying to protect our staff, so it bit Mr Goudie. Notice that it attacked him instead of our employee, who was standing closer to the tiger’s head,” said Tanawin Boonpang, Tiger Kingdom’s supervisor, to the Phuket Gazette in an exclusive interview following the attack (story here).

Since the accident, Tiger Kingdom employees have kept in regular contact with Mr Goudie and were happy to see him return.

Though Mr Goudie said that his fondness for tigers and big cats in general remained, he wasn’t quite ready to get back in the cage with them.

“I don’t know if I’ll go back into the cage. We’ll see, maybe. One step at a time,” Mr Goudie said. “I’m just happy to come back and catch up with everyone.

Mr Goudie, who continued to give glowing statements about Tiger Kingdom and the care he received at Phuket International Hospital, will be in Phuket for two and half weeks.

“Last time, I missed seeing things. [There’s] a lot of things I want to catch up on,” he said.