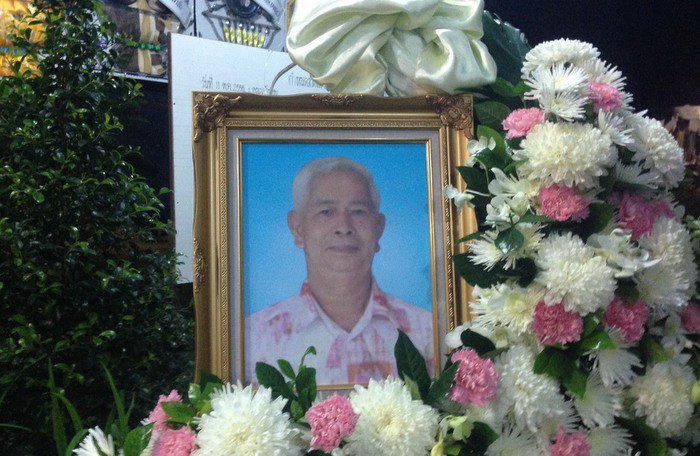 PHUKET: Family members of the patient whose death may have been prevented if rioters had not blocked the ambulance he was in from reaching a hospital last weekend, are prepared to sue those responsible for initiating the mob (story here).

Chian Srichoo, 73, was being transferred from Krabi Hospital to the better equipped Bangkok Hospital Phuket for coronary stenosis [blockage of the coronary arteries] when the rioters forced the ambulance to re-route to Thalang Hospital. Serious medical complications had started as the ambulance arrived on the island (story here).

Mr Chain’s 35-year-old daughter Nathaya Sri-In said that she and other relatives had agreed to file the complaint against the instigators.

“That night my father had pain in his chest and trouble breathing, so I took him to Krabi Hospital,” Ms Nathaya said on the fourth night of Mr Chian’s funeral in Krabi.

“Doctors said that my father had coronary stenosis, so we decided to take him to Bangkok Hospital Phuket for better treatment.”

Ms Nathaya said that rioters would not let the ambulance through and that rescue workers pointed them to an alternative route that had also been taken over by the mob.

“They wasted about 20 minutes of our time and my father got worse. The medical team administered CPR [cardiopulmonary resuscitation] the whole time. We ended up having to go to Thalang Hospital before making it to Bangkok Hospital Phuket. However, my father didn’t make it,” Ms Nathaya said.

Family believe that had the ambulance been able to get through, Mr Chian would have had a better chance of survival.

“I heard a rumor claiming that we were not upset about the blockade, which is not true. My father is dead. If it happened to you, you would also be grieving like me,” Ms Nathaya said. “They must be held responsible for what they did.”

Ms Nathaya’s husband has already informed the Thalang Police that they plan on submitting the formal complaint after the funeral services.