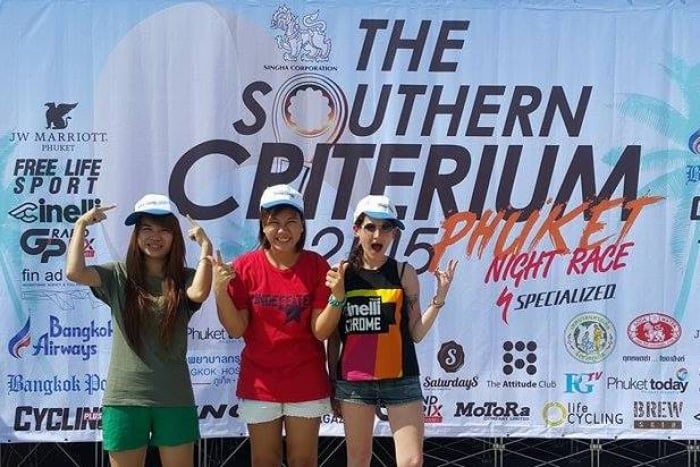 PHUKET: The first-ever Southern Criterium attracted more than 300 cyclists to the shores of Phuket and finished without a hitch on May 30, with competitors and organizers already amped up for next year’s edition.

Spectators and racers from all around the nation were watching the event results closely at Saphan Hin, as members of the Thailand National Team and professional fixed-gear criterium racer Paolo Bravini from Team Cinelli Chrome were in attendance.

Saphan Hin was packed with Phuket’s top cyclists, and competitors from much further afield, who gathered to take part in the first Southern Criterium. Video: PGTV

The VIP race had a surprising and exciting end, with Jessada Choodath coming in first place as the only competitor riding a fixed-gear bike racing against mountain and road bikes. Mr Jessada blazed past the other racers, coming in a full 25 seconds before the second place competitor, Tirakit Wanichayakorn, crossed the finish line.

Mr Jessada told the Gazette that he had been on a business trip in Phuket from Bangkok when he decided to join the race.

“Normally, I use fixed-gear bikes on a daily basis in Bangkok. I am so happy to have won first place riding this bike,” he said.

“I will be back for the next race in Phuket.”

Vissaves ‘Born’ Kumpanthong, event organizer and director of Bangkok Criterium, told the
Gazette that he was thrilled with the outpouring of support for the event and the overall attendance.
“My expectations were exceeded. Next year, we will be back in Phuket with a bigger and even better race, under the name Phuket Criterium,” he said.