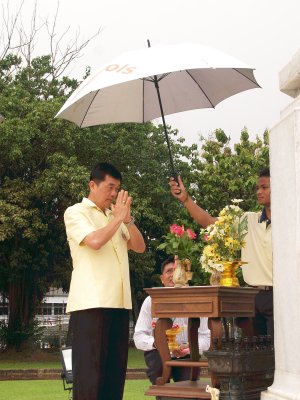 PHUKET: New Phuket Vice Governor Nivit Aroonrat is on the job as of today, June 21.

V/Gov Nivit comes to Phuket from Sukhothai, where he served as provincial vice governor for almost a year.

The 59-year-old native of Phuket brings 35 years of public service experience to the job.

He is taking over the position from departing Vice Gov Smith Palawatvichai, who has moved to Sukhothai to serve in V/Gov Nivit’s former position.

V/Gov Nivit is no stranger to Phuket Provincial Hall.

Prior to taking up his post in Sukhothai, he served as Chief Administrative Assistant (Palad) in Phuket from December 2005 to December 2006.

Despite being a Phuket native, he applied for and was granted a transfer off the island in 2006.

At the time he told the Gazette he had applied for the transfer because he was tired of the hard work the Phuket job entailed.

As Palad, Mr Nivit was in charge of many fractious disputes on the island, including the eviction of squatters from Soi Phra Barami 8 in Patong and the eviction of the vendors in front of Laguna on Bang Tao Beach.

He was heavily involved in the introduction of a new set of regulations for dive businesses, rules that were subsequently thrown out by the Administrative Court.

A law degree graduate from Ramkhamhaeng University, he also holds a master’s degree in public administration from the prestigious National Institute of Development Administration.

He received an award for excellent public service in 2001.