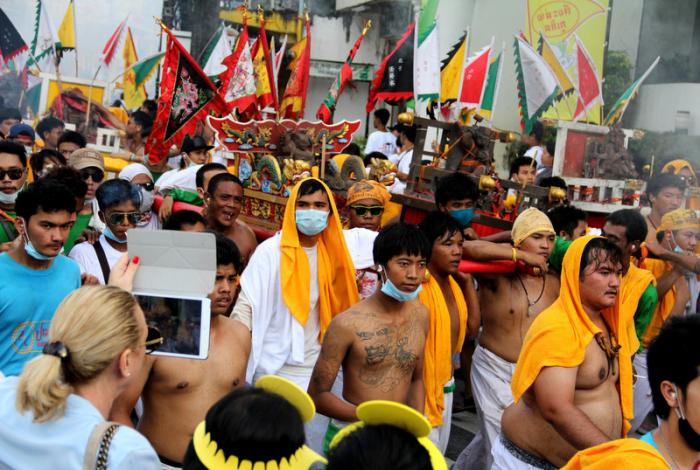 According to the TAT, during the closing days of the festival, hotel occupancy along the parade routes was up to 90 per cent. Additionally, officials said occupancy of beach hotels also increased during the festival.

The director of the TAT’s Phuket Office, Anoma Wongyai, told the Phuket Gazette that tourists from China, Malaysia, Singapore, Australia, Russia, India and the Middle East have visited Phuket so far in this year’s festival.

“During the Vegetarian Festival, that is, between October 1-9, about 270,000 tourists visit the island,” Ms Anoma said. “The many Thais and foreigners that visit are making Phuket hotel occupancies increase 72 per cent on average, or about 38,000 of Phuket’s 53,000 rooms. And it’s likely we’ll see an increase this October due to long holidays, school breaks and National Day of the People’s Republic of China.”

“After decreasing over the past two months, the Chinese tourist situation is looking ‘better’ at the moment,” Ms Anoma noted.

Ms Anoma said that the number of Chinese tourists, many of them with their families staying both in Phuket Town hotels and beach resorts, will help buoy the profitability of the festival. She also said the number of higher-end independent travellers who stay at pool villas and beach hotels was increasing.

Bhuritt Maswongssa, president of Tourism Council of Phuket, said that flights to Phuket increased from 230 to 262 during this year’s festival.

“What makes more tourists come to Phuket this year is the overlap with the Chinese national holiday,” Mr Bhuritt said. “Also, the heat in the Middle East and India this time of year helps drive Phuket tourism.”

“Australian tourists are confident in our public safety standards, so that area is doing well. During the rest of the monsoon season we’ll see about 75 per cent hotel occupancy on average,” Mr Bhuritt added.