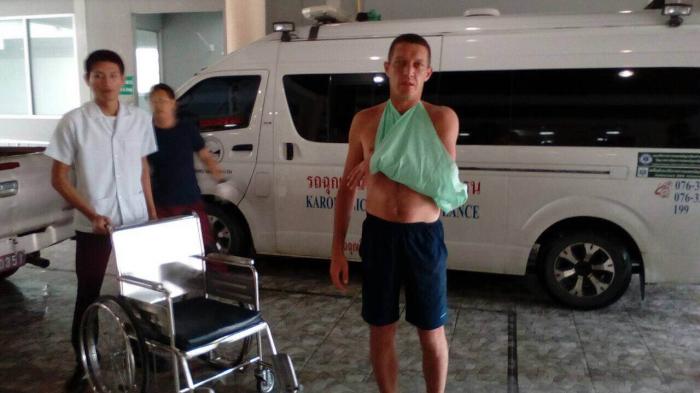 PHUKET: A Russian man broke his arm today when he was dashed against rocks by strong waves off Karon Beach, after ignoring red flags warning beach goers not to swim in the dangerous surf.

Viktor Sizouenko, 32, was rescued by lifeguards and given first aid by medics at the beach before being taken to Patong Hospital.

Eye witnesses said Mr Sizouenko ignored the red flags on the beach and was slammed into a rock by the big waves.

“He was lucky not to have been more seriously injured,” said Kata-Karon chief lifeguard Uten Singsom today, who advised beach visitors to be extra careful with monsoon wind and rain now battering Phuket’s shores.

Mr Uten said the monsoon season would clear up by the end of next month. In the meantime, he warned the public not to ignore the red flags put on the beaches for their safety.

Late last month, a Russian tourist died shortly after bring pulled out from the waves by lifeguards at Karon Beach (story here).