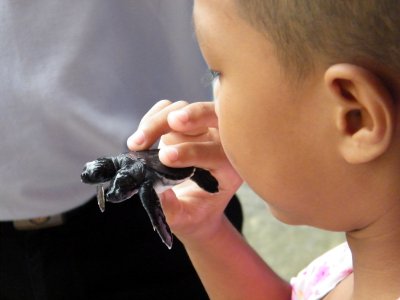 PHUKET: A two-headed turtle born in late July is thriving under the care of staff at the Royal Thai Navy base in Phang Nga as it celebrates its one-month birthday.

The green sea turtle, born in a Thai Navy conservation area in the Similan Islands, was initially earmarked as one of scores of turtles to be set free in Phuket earlier this month as part of a turtle release ceremony to mark Mother’s Day.

All that changed when the organizers realized it had two heads.

Marine biologist Kongkiat Kittiwattnawong of the Phuket Marine Biological Center (PMBC) noted soon after its birth that the turtle was very weak and said its chances of long-term survival were slim.

Two-headed turtles are extremely rare, occurring fewer than once in a million live births, he said.

But as of August 27, the turtle was not only doing very well, it had become the star attraction at the Royal Thai Navy Sea Turtle Conservation Center at the Navy Base at Son Ngam Beach in Tai Muang District.

Chaloemsak Chaijit, information officer with the Third Naval Area Command at Cape Panwa, told the Gazette, “The little turtle is perfectly healthy. It is now 28 days old and its shell is getting stronger by the day.

“It is eating a lot more now too, about 50 grams of food a day up from about 30 grams when it first arrived here,” he said.

“It will take about two months before we will be able to determine its sex. After we have, we will give it a name, which we will announce in the second week of September,” he said.

About 30 to 50 people come to the conservation center each day to watch the turtle, he added.

What do you think would be a good name for the turtle? Share your ideas with fellow readers in the forum below.