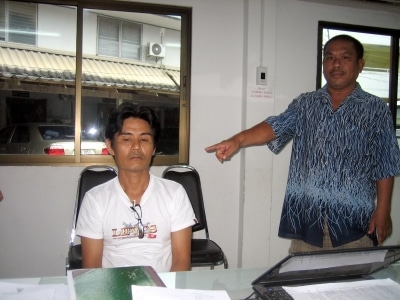 PHUKET: A man suspected of an attempted murder in Phuket last year was arrested by Lampang police on Saturday after more than a year on the run.

But it wasn’t all woe for the suspect, 41-year-old Bangkok resident Prasop Homhuan.

Prasop told officers escorting him to Phuket from Chiang Mai that despite his arrest he was very excited – at the prospect of flying on an airplane for the first time in his life.

Prasop is wanted for the attempted murder of a man in a Chalong karaoke bar last year.

Around 1am on May 30, 2009, he was drinking with friends at Lek Karaoke on Chao Fa West Road in Chalong.

Later, a man with whom Prasop had a dispute, Pramot Kaewliphon, entered the bar and sat down behind him.

Several drinks later, Prasop turned and saw Pramot and a loud argument broke out, culminating in a fist fight.

Prasop had to be pulled away from Pramot and sent home by his friends.

Later the same night Prasop allegedly returned to the bar and shot Pramot as he was leaving the venue.

Prasop fled to Chiang Mai, where he was hiding until his arrest.

On Saturday he went to visit his mother in Lampang where he was arrested.

The Lampang police flew to Chiang Mai to take Prasop into custody and bring him back to Phuket.

When the officers paid more than 3,800 baht for Prasop’s flight to Phuket, the suspect was unable to contain his delight, the police said.

The suspect is in police custody and faces charges of attempted murder and carrying a weapon without a license.