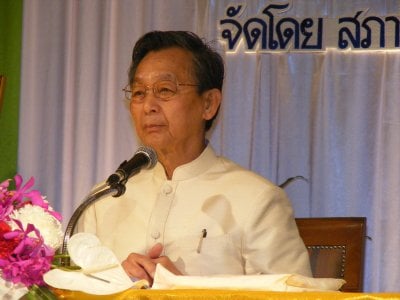 PHUKET TOWN: Phuket leaders and ordinary residents put their heads together at a meeting Saturday to consider how Thailand can reform itself and resolve the ongoing political crisis that caused this year’s violent red-shirt protests.

The seminar, “Reforming the Country at a Time of Change“, was the fourth of five organized by the National Economic and Social Advisory Council (Nesac) this year.

Mr Chuan was welcomed to the event by Anchalee Wanich-Thepabutr, who is deputy secretary of the Prime Minister’s Office, Phuket Governor Wichai Phraisa-ngop, and Phuket Police Commander Pekad Tantipong.

Around 300 people attended, including leaders of private sector and community organizations, journalists, academics, members of Nesac and ordinary Phuket residents.

The last seminar in the series is due to take place in Khon Kaen from September 17 to 18.

Opinions and proposals submitted during the five events will be collated and presented to the Cabinet and at Nesac’s annual meeting in Bangkok.

Poranee Leenutapong, vice chair of Nesac, said the series aimed to collect the opinions of the people in every region to present to Nesac’s annual seminar in 2010, which will mark 10 years since the council was established.

It was an opportunity for the public to have a role in Nesac by relating problems and offering opinions and proposals for the Cabinet. It was also a PR exercise, presenting the role of Nesac to the public, she said.

Because of this, human resources were always a big issue, one without end, he said.

“In the past, education was the thing that expanded opportunity. Policy expanded the opportunity to attend educational institutions to the regions, and provided scholarships in order to give more opportunities to people without much money,” he said.

“These days, we have to look at the issues of virtue, morality and awareness of responsibility. The value of people is dependent on giving them knowledge, because the problems we are facing are not caused by people with less knowledge than people in the past.

“The problems we meet today are problems related to the awareness of every person in our institutions. If they get good people, they’ll be good.

“Because of that, all the many areas that are progressing are due in part to good people coming in and getting on with things. But the areas which have bad people or people with weaknesses in their awareness of their responsibilities, will have problems. Because of this, developing people is something that has to take place continuously, without end,” he said.

Mr Chuan said the government was sticking to its principles of governing according to the rule of law. Whoever breaks the law must be punished; if the government did not stick to this principle there was no reason to go on, he said.

Change was a continual process, he said. Over the last seven to eight years politics had changed in good ways and bad. Mostly, the change was good, and Thailand was progressing. The people were more aware of their rights and duties and were more concerned about democracy.

In the past, some “small things” had happened, but they were history, he said. Now that was over and soldiers had matured. They weren’t doing such things. But the problems the country faced now were like a new disease. For example, money politics had hindered democratic development, he said.

When politicians were elected through vote buying, they had to recoup their investment. This involved cheating and corruption. When politicians cheated, bureaucrats cheated. This had effects on the benefits received by the whole country, he said.

Because of this, politics had a role in causing the problems, but it was not the only cause.

There were other organizations who had a role in opposing the problems, including the media and people everywhere. Because of this, every faction had to come together to take responsibility for the country going forward, rather than making it the responsibility of politics to fix the problems on its own.

Mr Chuan summarized by saying every side had to do its duty with awareness of its responsibilities. From small duties to large ones, all had equal importance, he said.