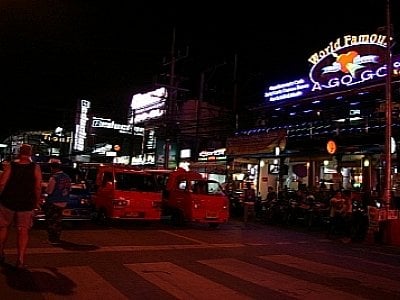 PHUKET: The commander of the Phuket Provincial Police yesterday ordered the tuk-tuk drivers responsible for beating two Dutch tourists in Patong earlier this month to turn themselves in or face stiffer punishment.

The fight broke out in the early hours of August 1 allegedly after the two tourists refused to pay 1,000 baht in damages after one of them walked into a parked tuk-tuk.

A police officer nearby tried to intervene, but was allegedly restrained by the assailants. To end the fracas, the policeman fired a warning shot into the air, reports said.

The tuk-tuk drivers then set up a blockade in front of Soi Bangla to protest “unfair treatment” by police.

The two Dutchmen were treated at Patong Hospital for injuries sustained in the fight.

“According to the information [provided], a tuk-tuk organization blockaded the road because they were not happy with the police handling the incident,” Maj Gen Pekad said.

The tuk-tuk drivers claim that police did not respond quickly enough to prevent a fight, he said.

“Whatever the problem, purposely blocking a road is not the way to solve it. It is also against the law. You can blockade the police station, but not public roads.

“This type of behavior will only ruin Phuket’s reputation as a tourist destination and cause trouble for people,” he added.

“I understand that the drivers became angry because they thought the police did not pay attention to their problems. There was a delay in police response and I have asked Col Arayapan and my deputy commander to order their officers to be more active,” Maj Gen Pekad said.

“This is a lesson to be learned,” he added.

One of the tuk-tuk drivers claimed that a police officer hit him in the chest with a gun during the altercation.

“If a police officer hit him with a gun, he did not intend to do it. I agree that if this happened it is the officer’s responsibility, but we need to talk out these problems, not block the road,” he said.

Maj Gen Pekad remained firm in his intent to punish those responsible for the fight.

“Nobody will be exempt from punishment for this. Police have photos of the four tuk-tuk drivers who participated in the fight – and we have their names.

“Tell them that they must surrender to police, and if they do, their punishment will be reduced,” Maj Gen Pekad told the tuk-tuk drivers at the meeting.

“I understand there will be no more protests on the roads. There will always be a way out, but blocking the road is not one of them,” he said.

The meeting did not address whether or not the policeman involved in the incident fired a warning shot.