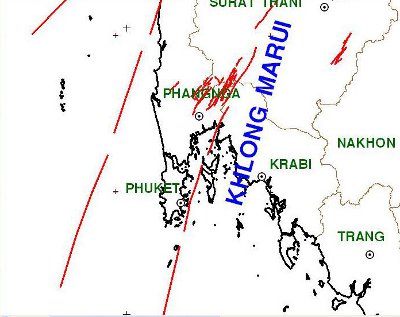 PHUKET: Coastal residents of Takuapa District in Phang Nga were put on alert this morning following a minor earthquake.

The event turned out to be a localized tremor that caused no damage, not the effects of a larger event further away like the tsunami-causing quake that devastated Phuket and the entire Andaman coastline in 2004.

Somkiat Intorrajan, director of the Department of Disaster Prevention and Mitigation office in Phang Nga (DDPM-Phang Nga), said the 2.7-magnitude tremor hit at 3:48am and lasted just 10 seconds.

Residents of the area felt the tremor, but no injuries or damage were reported.

Provincial officials were told to monitor the situation and prepare to take measures in case the tremors were a foreshock of a larger event yet to come.

Officials who visited the area found that the tremor failed to cause any panic among local residents.

Takuapa District Chief Siriphat Phattanakul said he put coastal residents on alert as he was not immediately sure whether the event was just a small localized event or the effects of a larger earthquake further away.

Coastal parts of Takuapa, including the resort area of Khao Lak, suffered the worst loss of life in Thailand from the 2004 tsunami disaster caused by a 9.2-magnitude earthquake centered in the Sunda Trench, hundreds of kilometers to the west across the Andaman Sea.

The tremor this morning followed a warning by Dr Smith Dharmasaroja last weekend that activity along Thailand’s active fault zones could cause cause major damage in 2012.

To view the full map of 15 active fault zones in Thailand click here.