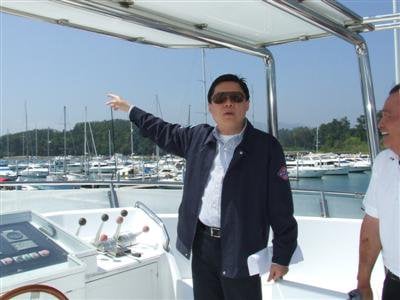 Deputy Transport Minister Kuakul Danchaiwijit, Marine Department Director Chalor Kotcharat and other officials arrived at the marina at about 11am.

Deployed two months ago, the wave attenuator effectively dampens wave force 70% to 80% and reduces the height of two-meter waves to under one meter, he said.

The structure design is based on existing floating wave attenuator in the US, he said.

The Transport Ministry officials were invited to inspect the structure and assess its impact on the environment over a six-month period, he said.

Ao Po Grand Marina managing director Kasem Chiarasomboon said the attenuator is anchored to the sea bed in 50 places at depths of around four or five meters.

If permission for the marina is granted after the six-month trial period, the floating wave attenuator could be extended into an ‘L-shape’ offering even more protection, Mr Wirawut said.

Man nabbed over killing of Japanese in Phuket