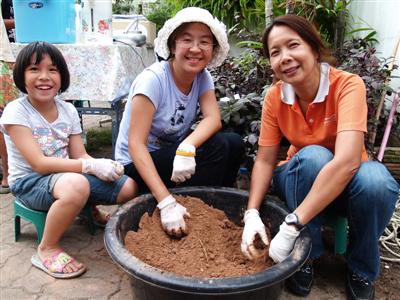 PHUKET CITY: The grass will be greener for sea cows (dugongs) visiting Phuket thanks to a seagrass fertilization project currently underway.

Bangkok Hospital Phuket and the Mekawanich Foundation are teaming up to produce 20,000 ‘effective micro-organisms’ (EM) balls that will be introduced into the sea off Pa Khlok and into the fetid waters of Klong Pakbang in Patong.

The project will be launch on December 19 at the Weerasatree Anusorn School in Pa Khlok.

The event, starting at 9am, will be presided over by Fourth Army Area Commander Lt Gen Pichet Wisaijorn.

Under the plan, 10,000 EM balls will be put into the ocean to encourage the growth of seagrass off the coast of Pa Khlok.

Project Manager Pareeya Jullaphong of Bangkok Hospital Phuket’s Cooperate Social Responsibility (CSR) unit said statistics from the Phuket Marine Biological Center (PMBC) at Cape Panwa show there are only 220 dugong left in Thai waters, and only about 20 in Phuket.

Dugong are sometimes spotted in the waters off Pa Khlok, where there are still extensive seagrass beds.

The area is thought to support three individual dugong, she said.

It is hoped the EM balls will encourage seagrass growth in the area and spur an increase in dugong numbers there, she said.

Makawanich Foundation President Nonthalee Makawanich, also owner of Siri Hotel on Yaowarat Road in Phuket City, said EM balls are effective both as a fertilizer and as a way to treat wastewater.

The balls are formed by hand and are formulated to slowly dissolve in water.

“At the first event on December 19, we will place 10,000 balls along the seagrass line, then monitor the results over time. If it works, we will throw in more in the future,” she said.

Volunteers are welcome to take part in EM ball rolling sessions in the parking lot of the Siri Hotel, opposite Timberhut nightclub, Saturdays and Sundays from 3pm to 6pm.

Everyone who takes part will be welcome to attend the December 19 event, when the balls are thrown off a boat into the sea off Pa Khlok, she said.

Another 10,000 EM balls will be thrown into the stretch of Klong Pakbang in Patong at 2pm the same day. The balls will be put in at 10 different locations along the filthy klong, including the stretch that runs behind Jungceylon.

“The water there is in very bad condition, very smelly and dirty. If the EM balls can help treat it, perhaps Patong Mayor Pian Keesin will offer us a budget to continue the project in the long term,” Ms Nonthalee said.

The PMBC’s Kanjana Adulyanukosol, Thailand’s leading dugong researcher, said there was little proven scientific evidence to prove the long-term effectiveness of EM balls, either for wastewater treatment or as a fertilizer for sea grass. A similar project has already been tried off the coast of Chumphon, she said.

A thorough monitoring regime would be needed to determine if the scheme is showing positive results, she said.

As a means of wastewater treatment, there have been some cases of rapid improvement in water quality over small areas, with dirty water quickly becoming clear.

In these cases the EM balls effectively change organic matter to inorganic, she said.

However, the only long-term solution to wastewater problems of the kind Patong is facing is to reduce the pollution at the source, she said.