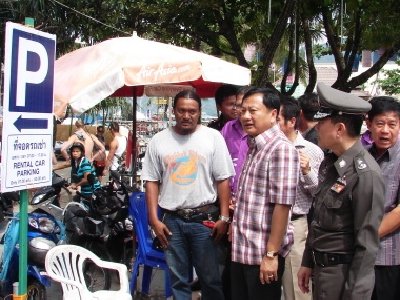 PHUKET: The new parking zones along Thaweewong Road (the beach road) in Patong have finally been unveiled, allowing more room for tourists to park along the beachfront.
Phuket Governor Tri Augkaradacha on Thursday officially opened the new zones, heralded as the first in a series of steps to solve the tourist town’s traffic and parking woes.

The changes make about 60 per cent of the parking space along Thaweewong Road available for the public, with the remainder designated for motorbike and car rental operators.

New parking signs have been posted to mark where tourists and rental operators can park.

There has long been public anger about rental operators monopolizing beachfront parking in Patong, but Gov Tri hopes the new parking regulations will put an end to the issue.

Under the new rules, rental operators are allowed to park only one car and four motorbikes in each of their allotted spaces between 7am and 5pm.

After 5pm these parking zones are open to the public.

“I ask motorcycle riders to please park their two-wheels neatly in a line. Be thoughtful of others because most days I have had to help move motorcycles. It would be good if Patong Municipality produced signs explaining this to tourists,” he said.

The Thaweewong Road parking reshuffle is the first step pushed through by Governor Tri as he attempts to iron out several tourist concerns in Patong, including recurring problems over tuk-tuk fares and the town’s ongoing traffic problems.

All change at FC Phuket