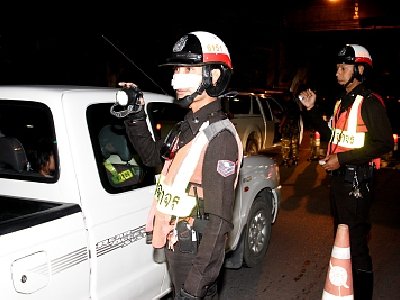 PHUKET: A young man killed in a hit-and-run accident is the fourth road fatality recorded in Phuket during the ‘Seven Days of Danger’ road safety campaign, now in its final day throughout Thailand.

The victim, 21-year-old Chalong resident Anek Karnchonchai, died after his motorbike crashed near Baan Kata School on Patak Road in Karon at about 6am today.

According to the Day 6 report issued this morning by the Department of Disaster Prevention and Mitigation Office in Phuket, the accident was caused by a speeding van that illegally overtook Mr Anek’s motorbike on the hilly section of the road, where passing is forbidden.

Mr Anek was rushed to Vachira Phuket Hospital. He died at 6:40am.

The accident was one of seven recorded yesterday, bringing the six-day total in the province to 62. Of these, nearly 90 per cent involved motorbikes.

By Day 6 of the campaign last year, the Phuket toll stood at six dead and 85 injured in 79 reported accidents.

Among the seven people injured yesterday was one foreigner, Russian tourist Vitaly Kapenko.

Mr Kapenko, 49, was injured when he came off his bike on Kamala Hill. The cause was listed as “unfamiliarity with the roadway”.

Yesterday’s youngest accident victim was listed as three-year-old Nareumon Reuttijak, who was thrown to the pavement on Rat-U-Thit 200 Pi Road in Patong when the motorbike she was on hit a pedestrian.

During the first six days of the campaign, police pulled over 50,174 vehicles and arrested or fined 3,091 people.

Police tested 7,622 people for drunk driving, and charged 27 of them.

The nationwide number of injured people reached 2,656, well over the 2,473 hurt during the same period a year ago.

Chiang Rai has seen the highest number of accidents with 86, followed by neighboring Chiang Mai with 79.

The most fatalities have occurred in Lop Buri (12) followed by Prachuap Khiri Khan (10).

Most offenders failed to follow ‘no-advertising’ regulations which could subject them to a one-year prison term and/or a maximum fine of 500,000 baht, in addition to a daily fine of 50,000 baht until breaches are corrected.