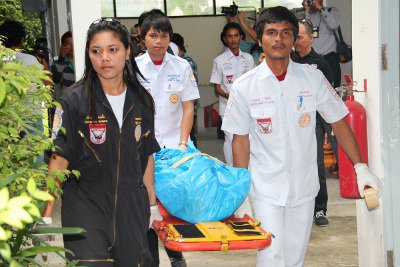 “Police are investigating four people named as missing. We will ask for DNA samples to be provided so they can be sent to the Institute of Forensic Medicine in Bangkok for verification,” Col Jirapat told the Gazette.

Of the three “new” missing persons being investigated, he identified one as a Frenchman named “Emmanuel”.

The Frenchman became a suspected victim of the fire after a friend said he recognized a watch still on one of the bodies on Friday.

One of the other new suspected victims is believed to have been British. Police are expected to release the man’s name later today.

Two Thais being investigated as suspected victims were named as Duangporn Butkor, 32, and Nipharat Sutthasorn, 36, from Nong Bua Lumphu, near Udon Thani.

Atthapol Butkor told police that his sister, Ms Duangporn, had been missing since Friday.

She worked for a hotel in Patong and on that night she took hotel guests to Tiger Disco, so he thought she might be one of the victims of the fire, he said.

However, after inspecting the bodies, he could not positively identify his sister’s remains among them.

“She usually wore two rings on the same finger, but after checking the bodies I could see only one ring on the correct finger, so I am not sure,” he said.

Ms Nipharat became a suspected victim after a female friend reported that Nipharat went to Tiger Disco on the night of the fire. She has not been seen since.

Police believe at least one of the victims was female or a transgender person as they found silicone implants under the breasts.

The friend asked to see that body in particular, but found she was unable to make a positive identification.

News of the “new” suspected victims follows a female Thai staffer who worked at Tiger Disco reporting on Friday that she identified a watch and a bracelet found on one of the bodies.

However, she too was unable to make a positive identification.

All four of the bodies found in the aftermath of the fire have now been transferred from Patong Hospital to the Institute of Forensic Medicine in Bangkok, where any tests for identification will take place.