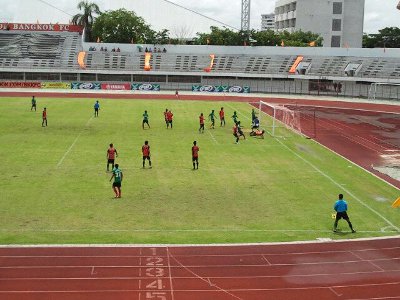 PHUKET: Phuket FC fans who gathered at the Nok Sanarm sports bar near Surakul Stadium in Phuket Town this morning erupted with cheer when the Islanders scored late in their away-match at Bangkok FC, then held on to win 1-0.

The result marks the Islanders third consecutive victory, all from a 1-0 scoreline, and gives them great momentum going into next Sunday’s home match against top-of-the table Ratchaburi.

The three points also move the side up into 10th place in the 18-team Yamaha Division One, a relatively comfortable position after drifting in and out of the dreaded five-team relegation zone for much of the season’s first half.

The winning goal, credited as an own-goal to Bangkok FC, followed a deadly free kick deep from the left wing by Phuket’s Nonthaphan Jiensathawong late in the game.

The unusual morning play, at Bangkok FC’s Chalermphrakiet Stadium in Thonburi, was the result of a rain postponement called by officials 25 minutes into play in a match that kicked off at 5pm last night.

The postponement was a sort of deja vu for the two sides, who last year were forced to cut their last meeting short seven minutes before full time due to a freak storm that hit the capital with Bangkok FC up 5-2.

But unlike last year, when Phuket ultimately conceded the three points, this time the delay worked to their advantage; the Islanders fended off sustained attacking from Bangkok before going on to win and move into 10th place on the table.

Whether they keep their new ranking will depend on the result of Songkhla FC’s away match at Sriracha tonight. If that match ends in a draw or win by Songkhla, Phuket will go back into 11th place; a win by the Sriracha “Blue Marlins” would secure Phuket’s 10th place standing.

The struggling Songkhla side will be without the services of star keeper Jonathan Matijas, who is back in France. Their coach also recently resigned.

Also anticipated tonight, albeit with some trepidation, will be a southern derby pitting 14th-placed Patthalung FC against 6th-placed Krabi FC. Kick-off at Phatthalung Central Stadium is at 6pm.

Both teams are playing their first season in Division One and both have recently been fined by the league for unruly fan behavior.

The other Division One match tonight will pit Khon Kaen (15th) against Rajpracha (17th).

Other Division One results from last night: