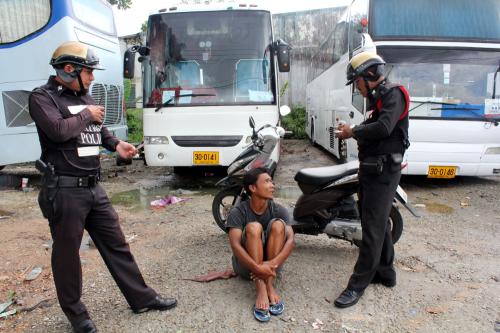 PHUKET: A man caught stealing an air-conditioning compressor from a bus in Phuket Town yesterday morning told police that he needed money to pay for medical treatment for his son.

Chaiwut Kongkhaoriab, 28, was caught in the act by mechanics at the garage where the bus was parked.

Pramoun Jitpakdee, one of the mechanics, said he was fixing the bus when he noticed Mr Chaiwut riding a motorbike around in front of the garage.

Mr Pramoun’s suspicions were aroused, and he and a colleague decided to hide and find out what Mr Chaiwut would do.

“He parked his bike, walked to the storage room and tried to steal the air conditioning compressor from the bus. When we saw this, we both ran out of our hiding place and caught him,” said Mr Pramoun.

Mr Chaiwut told the police he desperately needed money to cover the medical costs of his sick son.

“He told us he had been out of work for more than a month,” said Witarn Iadnimit of Phuket City Police.

“He said he didn’t have enough money to take his son to the doctor, so he decided to steal the air-conditioning compressor and sell it to get cash,” he said.

“We are continuing to establish all the facts of the case,” he added.