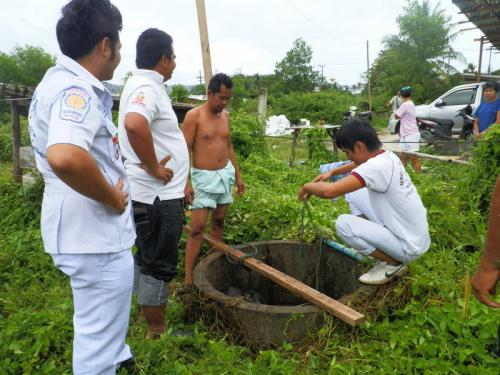 PHUKET: Quick action by a local Thalang villager prevented a baby buffalo from drowning in an abandoned well today.

Khamsue Chanpet, 37, called Kusoldharm Rescue workers to the well behind Wat Baan Don in Thalang, after witnessing the grazing buffalo fall into the well.

“I saw the buffalo walking and eating grass with the other buffaloes, and then he fell. He must not have noticed the well,” Ms Khamsue said. “The well is abandoned, but we don’t know what to do with it, so we just avoid it.”

Rescue workers arrived at the well at about 9:25am this morning.

“A group of us arrived at the scene and quickly tied the buffalo’s horns with a rope and tied the other end of the rope to a board to keep his head out of the water,” a rescue worker told the Phuket Gazette.

It took the rescue team about an hour to hoist the 2-year-old buffalo from the well. The baby bovine was then set free to join his herd in the nearby area.