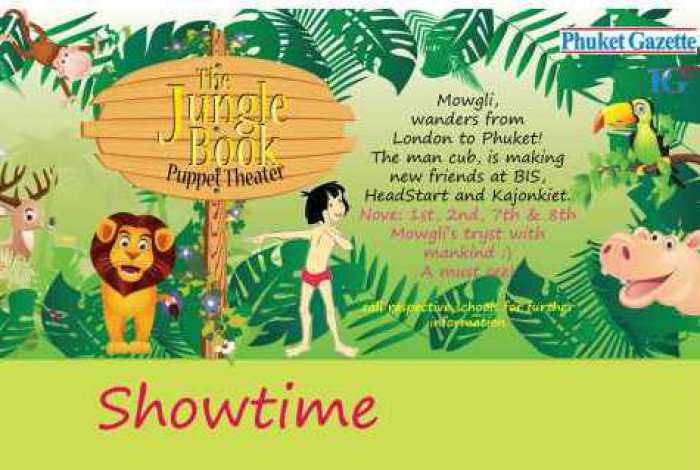 PHUKET: In the next installment of quality island entertainment, Events International and the Phuket Gazette are proud to present the Jungle Book Puppet Theater.

This colorful retelling will include everyone’s favorite characters in an interactive song and dance spectacular, which is sure to evoke vivid recollections of Kipling’s amazing jungle.

The classic story follows the adventures of Mowgli, a young boy who is raised in the jungle by a family of wolves.

However, not all the animals are concerned about Mowgli’s well-being. Shere Khan, the arrogant tiger, believes that tigers should be the “kings of the jungle” and feels threatened by the young boy-cub Mowgli. Without the help of Baloo the bear and Bagheera the panther, who agree to take the boy-cub to the “man village” for safety, Mowgli would no doubt fall into Shere Khan’s deadly paws.

Nonetheless, the jungle holds dangers and surprises for them all – and Mowgli’s extraordinary adventures have just begun! The rascally orangutan Louis, slippery snake Ka and the cheeky monkeys all add to the mayhem and mischief as Mowgli makes his way to the man village.

Tickets for all shows are 500 baht.

For more information, visit: thethaiger.com/phuket-events/The-Jungle-Book-Puppet-Theater-travels-London/7769 or call Sonu Kapoor at 091-326 0276