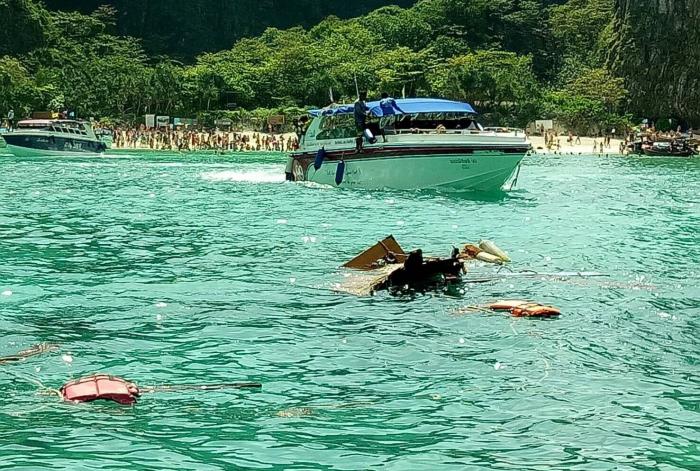 PHUKET: A minor was injured yesterday after a speedboat smashed into a longtail boat at Phi Phi Island’s Maya Bay.

Krabi Marine officials say they “now” plan to boost safety standards in the area after two similar “incidents” over just the past two days, and at least ten such crashes, some of them fatal, at Phi Phi over the past three years.

“Two passengers were on the longtail, one of whom was Lucia Quintela, a tourist from Italy. She received minor bruises and was later taken to a local hospital for treatment,” said Lt Col Anurak Parinyasathiragul of the Krabi Marine Police. “The speedboat was carrying 27 passengers, none of whom was harmed.”

Col Anurak questioned the driver of the longtail boat, who said the speedboat had suddenly just crashed into him.

“Wichan Somnuek, 33, was heading into Maya Bay, while the speedboat ‘captain’, named as Danai Art-Harn, was moving out of the bay and ‘ended up’ crashing into the longtail,” he added.

Boonchao Tangsiripaisarn, director of Krabi Marine Office, confirmed with the Phuket Gazette that there had indeed already been two crashes since the high season started just a couple of weeks ago – in fact, two crashes in two consecutive days.

“We need to do something about marine traffic safety,” Mr Boonchao suggested artfully. “We’ve already begun to observe the area to see what we can do,” he added.

Neither of the captains has been charged until authorities can confirm whose fault the incident was. Speeding in the area results, in theory, in a 2,000 baht fine and a month-long licence suspension.