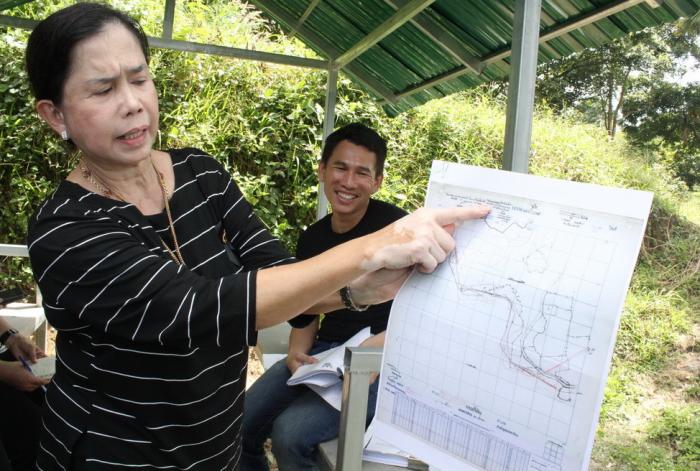 PHUKET: Department of Forestry officers yesterday morning checked up on land at Freedom Beach after some titles were revoked back in May, while the alleged owner threatened to sue them.

Foresty and Navy personnel were led by Boonsueb Samakwet, director of Forestry Division 12, at about 11am at the site.

These are the long-debated four-billion-baht titles covering 65 rai of land off Freedom Beach, officially revoked as two Chanotes were proven to overlap the Khao Narkkerd Preservation Forest (story here). This resulted in the land falling under the ‘preserved forest’ category in the hands of the forestry department.

“On September 8, we ordered the owners to demolish all buildings and leave the area within 30 days. The owners’ appeal pertaining to the case was also rejected by our department, and now we’re acting on our duties lawfully,” said Mr Boonsueb.

Officials also filed a complaint against a ticket seller after they discovered that the owners were charging visitors 200 baht each to access the beach.

“We are now installing ‘land seized’ signs at both the front and back entrances.”

The director additionally told the Phuket Gazette that documentation and GPS coordinates both prove that the land is, in fact, part of a preserved forest.

While the officials were surveying the land, the two holders of the aforementioned Chanotes, named as Eakkachai Sae-Iw and Benja Sae-Iw, arrived at the scene to claim their legal ownership of the land and to threaten to sue them.

“I purchased this land from Wirot Kongkaew, a descendant of Thaweep Wuthithamporn with Sor Kor 2 documentation dated year 2000. The original owner had ownership rights to the land before it was declared a national forest in 1954. All the legal processing has been done,” Mr Eakkachai shot back at the officers.

“We will bring the case to the attention of the Administrative Court to cancel the revocation letter. We will also request the right to possess and use the land while the case is under investigation. I am in the business of billboards and stickers in Samkong. I want the public to know that I not just a nominee on the title deed – I rightfully purchased the multi-billion baht land for the sake of future business prospects.”