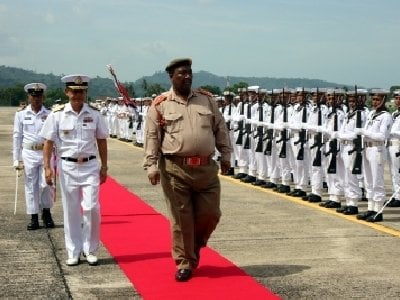 General Godfrey, 60, and his wife Busisiwe Portia arrived at 10am aboard a Royal Thai Navy aircraft.

Their arrival followed a visit by Gen Godfrey to the Royal Thai Armed Forces Headquarters in Bangkok, at which it became known that the military leader had an interest in visiting Phuket.

V/Adm Chumnum said he felt proud that Phuket’s fame as a tourist destination had reached the attention of Gen Godfrey.

At the conclusion of the formal welcoming ceremony this morning, Gen Godfrey and his wife were scheduled to take a boat tour of Phang Nga Bay.

The couple are scheduled to fly out on Thursday.