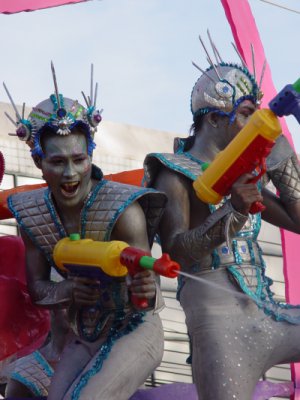 PHUKET: While getting soaked during Songkran in Patong has long been inevitable, the chances of staying dry in Phuket Old Town used to be somewhat higher.

Not this year. In a bid to reduce crowding on Patong Beach, the Tourism Authority of Thailand (TAT) is pushing Phuket Old Town as an alternative setting for the New Year water fight.

In Patong, “The Water Festival on the Beach” will center on Bangla Road on Monday and Tuesday.

There will be a parade and performances on stage at the beach end of the street, as well as beauty contests and competitions for kids.

Meanwhile, “Songkran in Old Town Phuket” will take place in and around Queen Sirikit Park on Thalang Road from Tuesday to Thursday.

Traditional activities will include merit-making and bathing Buddha images.

The TAT will also provide water tanks for water fighters.

In a new twist, craftsmen from some of the island’s hotels will show off their ice carving skills between 5pm and 10pm each day.

There will also be an imitation temple fair, with stage performances, movies and games such as dart throwing.

The island’s most skillful mixologists will put on cocktail shows each evening.

Wanaphapar Suksombul, assistant director of the TAT Phuket, said the numbers of Thai and foreign visitors would be up over the Songkran period.

Occupancy is currently around 70-80% in Phuket Town and around 80-90% at the beach resorts, she said. “By the time of the festival it will be full.”