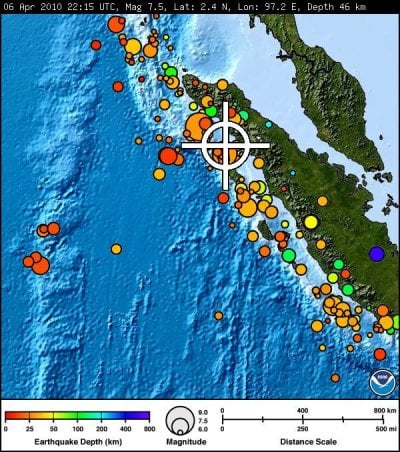 PHUKET: Confusion reigned in coastal areas of Phuket this morning after a tsunami ‘advisory alert’ was mistaken by many as a full-scale evacuation order.

The alert followed a 7.5-richter earthquake at about 5:15am local time along the north coast of Sumatra in Indonesia, along the same fault zone that triggered the 2004 tsunami disaster.

Phuket Governor Wichai Phraisa-ngop ordered the chiefs of Phuket’s three districts – Muang, Kathu and Thalang – to inform residents and tourists in risk areas to be prepared to evacuate.

In many cases the advisory was misreported or mistaken as a full-scale evacuation order.

By 7am when the warning was called off, some evacuation safety areas on high ground, including Patong Hill, were full of tourists and residents. None of Phuket’s 19 tsunami evacuation warning towers run by the National Disaster Warning Center had sounded evacuation signals.

NDWC Operations Director Somsak Khaosuwan told the Gazette his agency had carefully monitored sea-level data from its tsunami direct detection buoy off Phuket and other sources and decided not to sound the warning towers anywhere along the Andaman coast.

Advisory SMS messages were sent to provincial governors and others listed on the recipient list, however.

Sources at the NDWC earlier told the Gazette that earthquakes less than 8.0 anywhere along the Sunda Trench off Sumatra carried an extremely low likelihood of causing a statistically significant tsunami along the Andaman coast.

Cricket sixes on way to Phuket