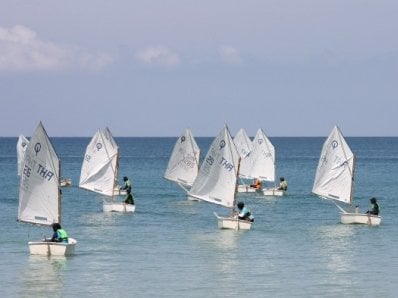 Organized by the Phuket King’s Cup Regatta, the event featured 16 Optimists and four Lasers competing for the Act II title, with the boats amassing points in the three-event series.

Stunning blue skies and calm seas set the scene for what proved to be two days of tactical racing.

With sailors taking part from Phuket, Songkhla and Chonburi, it was an opportunity for many to experience new conditions, locations and competitors.

The sailors faced challenging racing conditions with currents and oscillating light winds, which made tactics and the ability to read conditions paramount to success.

Chonburi-native, Anaphat Ngamdee, continued his success from Act I off Nai Yang Beach, with a clean sweep in Act II, winning six from six in the Optimist Class.

Despite not being used to the sailing conditions of Southern Thailand, Anaphat adapted well and continued to lead the fleet.

Phuket youngster Sumet Pandam wasn’t far behind and put in a consistent performance, finishing second in all six races to finish second overall.

In the Laser Class, Chonburi-native, Auckarapong Chayim, won all six of the races and claimed the Bang Tao title, ahead of Jittawat Boonrat from Songkhla and Teeranai Petcharat from Phuket, who finished in second and third, respectively.

The final race in the Series will take place off Cape Panwa on November 24-25.

Heading into Act III of the Optimist Class, Anaphat Ngamdee (11 points) leads the way with Sumet Pandam (27 points) in second and Charef Rakpongbandit (39 points) in third.

Auckarapong Chayim (11 points) leads the series in the Laser class, ahead of Jittawat Boonrat (28 points) in second and Teeranai Petcharat (30 points) in third.

Full results are available at: kingscup.com.