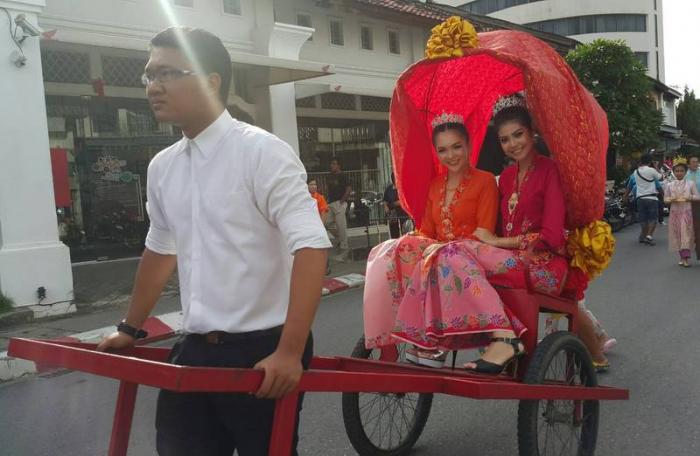 PHUKET: Six couples tied the knot during a mass traditional ‘Baba Yaya’ wedding ceremony at Hongyok mansion in Phuket Town on June 19, including Vice Governor Kajornkiet Rakpanitmanee and his wife Pitima Rakpanitmanee, as well as two other Thai couples and three Chinese-Taipei couples.

‘Baba’ and ‘Yaya’ are ancient terms for male and female respectively, used for the descendants of the late 19th century Chinese immigrants to Phuket.

“The Baba Yaya wedding has become an annual event and this is the eighth mass wedding ceremony we have organized. The event has a 200 year tradition of couples getting married in this unique style, and in recent years it has become increasingly popular,” said Anoma Wongyai, director of the TAT Phuket Office.

A parade was also held in the evening, along Thalang Road, to the Thai Hua museum, where couples obtained their marriage registration licences.

Ms Orasiri said the Baba Yaya ceremony was also open to couples who are already married, but wanted to renew their vows or celebrate their anniversary.

The event aims to promote Phuket as a wedding and honeymoon destination, boost local tourism and the economy.

Road closures in Koh Kaew may last until October