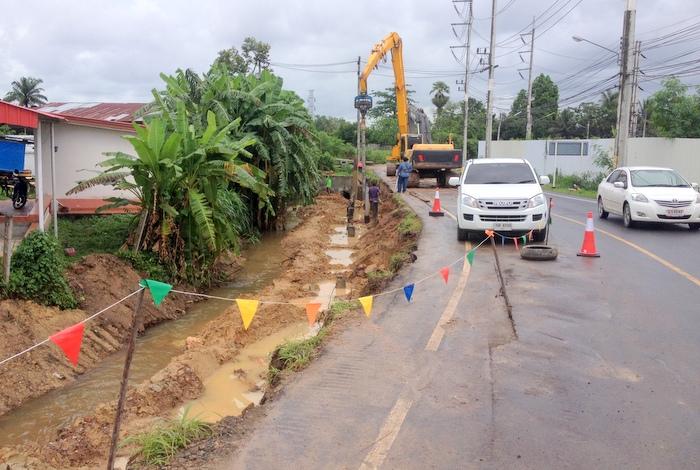 PHUKET: Parts of Soi Koh Kaew 33, behind the Isuzu showroom off Thepkrasattri Road in Koh Kaew, are under construction, with crews warning that road closures may inconvenience local residents and workers, including the staff at the Phuket Gazette.

Construction crews reportedly have an 8.4-million-baht budget to build a retaining wall along the side of the soi. Large backhoes and drilling equipment are laying the groundwork along the now-swollen channel that runs parallel to the road.

“The wall will be 500 meters long and about three meters tall,” says Khuakiet Chitkhua, president of the Koh Kaew Tambon Administration Organization (OrBorTor). “We expect to be done with the project by October, but it could be earlier or later than that, depending on the weather.”

The project is funded through cooperation between the Muang District government, the Phuket Public Works and Town & Country Planning office, and the local OrBorTor.

“Some closures may occur during the construction period, so we’re urging motorists to please follow the crew’s instructions in order to ensure everyone’s safety. We are sorry for any inconvenience, but we will have a better road here in the future,” said Mr Khuakiet.

Parts of the retaining wall were already under construction during July of last year, causing the road to be closed for more than two months (story here).