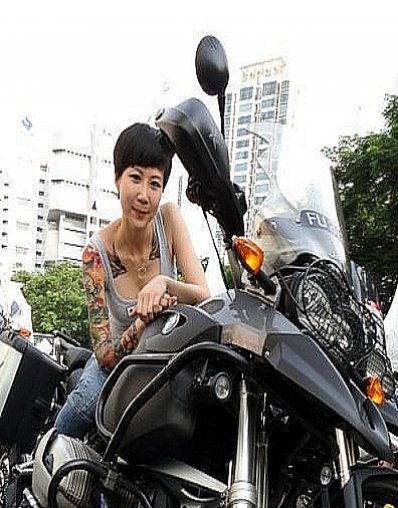 A hospital staffer today told the Phuket Gazette that Mr Chaw was rushed from Phang Nga Hospital to Phuket on Friday.

After operations to correct both of his broken arms and his broken right leg, Mr Chaw was moved to the intensive care unit, but has since been released and is now in a general recovery room, she said.

“He is still experiencing pain from his injuries, and now on pain-relief medication, but he is fully conscious and he can lift both of his arms even though they are in casts and support slings.

“He cannot walk yet, so his doctor has yet to set a date when he can be discharged from hospital,” she added.

Ms Tay and Mr Chaw were traveling with five other riders to Ratchaprapa Dam in Khao Sok National Park, in Surat Thani.

Ms Tay, who he named as Charlene Weei Tayshuan, died instantly in the crash, he said.

“Mr Terdsak had crossed over to the oncoming lane while overtaking the pickup. His Nissan Neo collided with Ms Tayshuan’s BMW motorbike. She was leading the group of riders.

“The car also collided with Mr Chaw, who was riding behind her on his BMW motorbike,” said Lt Col Chaipot.

“The rest of the riders managed to avoid colliding with the car,” he said.

The Kapong police officer who received the report over the radio told the Gazette that the accident happened near a small bridge, while a Narinthorn emergency rescue worker based at Phang Nga Hospital said the accident occurred at about 1pm.

He explained that the group of riders entered Thailand on October 26.

“They stayed in Trang for one night [last Wednesday], before heading to Rachaprapa Dam. They planned to return to Singapore today,” he said.

“He was held at the police station overnight and presented to Takuapa Court on Friday. He has since been released on bail from the court,” he said.

Mr Terdsak was staying with relatives in Takuapa. He had returned home to escape the floods in Bangkok, he added.

Lt Col Chaipot added that he doubted all reports from witnesses claiming that no vehicles involved in the accident were speeding.

“All of them said they were not driving fast, but looking at the evidence it is difficult to believe them. The car and the motorbikes suffered extensive damage from the impact,” he said.