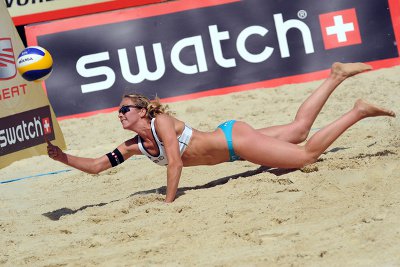 PHUKET: A lack of clarity in understanding which parts of Bangkok were flooded and how travelers could transfer to flights heading to Phuket has resulted in 15 teams pulling out of the FIVB Beach Volleyball Swatch World Tour, which starts on Karon Beach tomorrow.

However, tournament director Geoffrey Rowe of Pentangle Promotions today pointed out that the teams who have canceled were eligible for the qualifying rounds only.

The cancellations have had no effect on the top 32 teams competing in the world-class event, he said.

“The problem is that people overseas do not understand that Bangkok has two airports. When the news went out that Don Mueang Airport was closed, people sent emails to me asking how could they get to Phuket if the Bangkok airport was closed,” he told the Phuket Gazette.

“While we could convince some teams to come to Phuket, other teams pulled out of the tournament because they were concerned. Reports on the TV, such as those shown on the BBC or CNN, showed pictures of Thailand and they [the teams] were very worried.

“They saw pictures of buses where water was up to the top of the bus,” he said.

Regardless, the top 32 teams confirmed to compete in the main draw remain unaffected.

“Although we lost some teams, it doesn’t make a lot of difference to the tournament because the main draw has only 32 teams, so it just means there are less teams in the qualifying rounds

“We started with about 70 teams – about 15 teams pulled out – but all those teams would have had to play in the qualifiers – so now all that means is that we have only one day of qualifying matches,” he added.

Among the 55 teams from 27 countries are the current world number one ranked team, Julie Silva and Larissa Franca from Brazil, who are determined to make the Phuket tournament their 7th tour title this year.

April Ross and Jen Kessy (ranked 5 in the world) from the US will look to prevent that record and set their own by winning the Phuket event for a third time.

Having lost last year’s final, Greta Cicolari and Marta Menegatti (ranked 7 in the world) are sure to seek vengeance and an Italian victory.

Winners of the 2006 event, Xue Chen and Zhang Xi (ranked 3 in the world) from China will certainly have their eyes set on the top podium place.

All of which makes for six days ahead of highly competitive , world class beach volleyball.

Don’t miss this exciting event and these supreme athletes in action. Get down to Karon Beach for the Phuket Thailand Open staring on Tuesday and running through to the finals on Sunday.

Check the Gazette online for daily updates on results and tournament events.