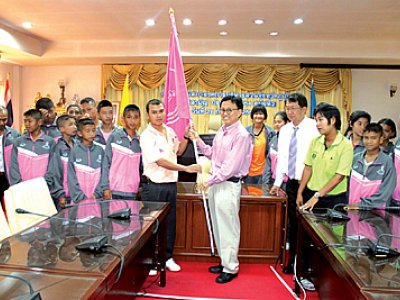 The Nakorn Trang games began on October 25 and continue for a month, concluding on November 23. Phuket student athletes are competing for the chance to participate in nationals to be held at a later date.

The ceremony was held at 3pm on October 22 at the PPAO meeting room, and was presided by PPAO President Paiboon Upatising who gave the following pep talk to the athletes prior to their departure for Trang.

“I would like to express pleasure to all the students who will represent the PPAO team; all you athletes must be able persons – healthy, strong and wholesome in both body and mind as to be successful and outstanding representatives of the PPAO.

“May you have kindness as athletes, knowing defeat – knowing victory, knowing forgiveness, and bring a good reputation for the PPAO for the sake of forward moving sportsmanship in Phuket.”

He then thanked all the athletes, teachers and parents for making the day possible.