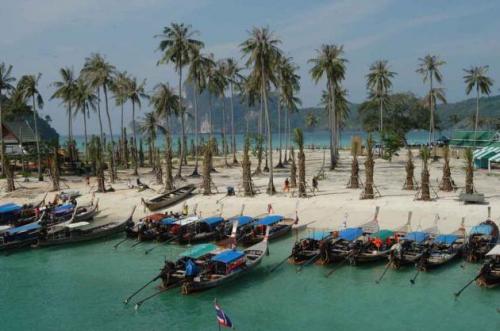 PHUKET: Coral reefs at the popular marine national park that covers the famous Phi Phi Islands near Phuket have reached a severe level of degradation due to bleaching, a senior government official revealed yesterday.

“Bleaching has affected up to 70 per cent of the coral reefs around Hat Noppharat Thara-Mu Ko Phi Phi National Park. Of the affected corals, 47.52 per cent have died,” a senior government official disclosed at an academic seminar.

His institute conducted the survey between 2009 and 2013 across seven marine national parks and works under the Department of National Parks, Wildlife and Plant Conservation (DNP), which hosted the seminar.

The state of the coral reefs at Mu Koh Lanta National Park, another popular dive destination for Phuket tourists, is even worse, with up to 80 per cent of them in poor condition. “Now, only 17 per cent of the corals are alive,” Mr Songtam said.

At the Mu Koh Chumphon National Park, about 70 to 80 per cent of the staghorn coral that were seeded as an experiment have also died from bleaching.

Coral bleaching emerged as a serious threat to Thailand’s marine resources around 2010 and 2011, prompting the DNP to shut down at least 10 diving sites to prevent further damage.

“Now, we plan to propose that the number of tourists is limited at each spot,” he said.

He also suggested that clear diving tracks be built to ensure that divers do not get too close to the coral reefs and cause damage.

Meanwhile, DNP chief Manopas Hua-mueangkaeo said the number of visitors to national parks had risen by 8.2 per cent last year, and this year, the DNP plans to open marine national parks to tourists from October 15.